The taxi seemed as well-equipped to reach our destination swiftly and efficiently as the space shuttle. A microphone hung at the ready by the right knee of the driver, a genial man of about sixty named Max, who initially seemed unsure of just how to get to the address we handed him. Before pulling away from the LAX terminal, he consulted what looked like a large iPod that sat above the dashboard on his left, which turned out to be a GPS guide. He glanced regularly at a dog-eared map on the seat beside him, his eyes swiveling from road to chart and back like a spectator's at a tennis match.  He also hovered over a white panel the size of a candy box to the right of the steering wheel; it offered more than two dozen buttons, a credit card slide and a readout that alerted him to traffic tangles so he could avoid them. Too late! We were smack in the middle of one, the meter ticking away as we crept along and motorcycles dashed by, cockily threading among the seven lanes of IS405 north. This passage to our first temporary home, an apartment at Oakwood Toluca Hills, took one hour and fifteen minutes. Fare with tip: $105.


This welcome to modern Los Angeles was irritating but didn't surprise me much; however, the ride did loose a wave of nostalgia for my first visit to the city. In 1947, my parents drove me to Dearborn Station, the great Romanesque Revival pile in downtown Chicago that was the eastern terminus of the storied Atchison, Topeka and Santa Fe Railroad. The building's 12-story clock tower rose like a beacon for passengers heading out west, of which I, a very excited 13-year-old, was one. I was traveling alone for the first time, aboard a silvery wonder called El Capitan that would deposit me, after three days and two nights, at Union Station in Los Angeles. I don't recall being particularly anxious about this solo journey, possibly because the year before I had seen The Harvey Girls and imagined, as the train pulled out, that Judy Garland, Ray Bolger and others in this MGM confection were on board, and that we'd be harmonizing "On the Atchison, Topeka and the Santa Fe" all the way to Cal-eye-forn-eye-a. 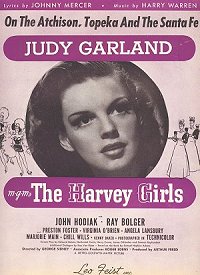 This fantasy never materialized, but I did sing "Moonshine Lullaby" to a three-year-old who, despite her mother's persistent and finally desperate efforts, refused to stop caterwauling as the rest of us tried to sleep, no easy task in the shifting configurations demanded by the chairs on the all-coach El Capitan. I knew this ballad and the rest of the score of Annie Get Your Gun by heart, and when the child ceased crying as I crooned beside her I cast myself as a hero to my eye-rubbing fellow passengers. At song's end, the girl stared up with what I took to be a look of sleepy gratitude, even affection. Proud and satisfied, I rose and returned to my seat, whereupon her wailing resumed, echoing through the car and across the great plains outside. Thus did I receive an early lesson in the vicissitudes of parenting.
For much of the trip, I gazed out the window at the wheat fields, buttes and whistle stops, wondering all the while what to expect when the stream liner reached its destination. Fred Allen, the acerbic comedian, whose Sunday half-hour we huddled around as if the radio were a sustaining hearth, said that Southern California was a great place to live, if you were an orange, a crack my father never tired of giving his mimicking endorsement. On the other hand, my parents always returned in a haze of awe after visiting Beverly Hills, where my mother's sister, Aunt Marian, and her husband, Uncle Harlan, were members in good standing of what was then known as the movie colony. She was a screenwriter and novelist, he had produced Road to Singapore (1940), the first of the seven "road movies" starring Bob Hope, Bing Crosby and Dorothy Lamour. They lived at 719 N. Roxbury Drive, and when I saw the swimming pool in the backyard, Fred Allen's zinger lost much of its sting.
I had arrived in an exotic foreign land. Palm trees lined the streets. Hired gardeners stood trimming hedges, or squatted to pull lawless weeds from the immaculate lawns. No one seemed to use the sidewalks, as if they were zoned against scuff marks, which perhaps in this manicured suburb they were. Oil derricks pumped on the grassy campus of Beverly Hills High School. Billy Marx, one of Harpo's boys, was a pal of my 11-year-old cousin Eric. Aunt Marian and Uncle Harlan knew Groucho and many other movie stars, including the matinee idol Fredric March. Spike Jones had lived next door, in a house now occupied by the stage and screen comedian Victor Moore, who engendered a certain winking speculation in the neighborhood after he married 22-year-old Shirley Paige, who was 45 years his junior. The Hollywood Stars, the Pacific Coast League team that Eric rooted for with the same passion I bestowed on the Chicago White Sox, was owned by a constellation of actual stars, among them Gary Cooper, Bing Crosby and Barbara Stanwyk. Even Cecil B . DeMille had a piece of this baseball action.
But nothing made a greater impression on my adolescent consciousness than Kiss of Death, to which Aunt Marian took Eric and me one afternoon. This noir film, about an ex-con (Victor Mature) trying to go straight, featured a natty thug (Richard Widmark, in his screen debut) who, in his lust for revenge, pushes an old lady in a wheelchair down a flight of stairs as he laughs with sinister gusto. By now, this scene has become something of a movie classic, seen by millions. Bugsy Siegel was gunned down as he sat in his Beverly Hills living room that June, a hit that, even had I known about it, would not have overshadowed Udo's celluloid shove.

In the six decades since that cinematic trauma, I have spent time as a journalist or tourist in some two dozen major cities all over the world, but have never explored Los Angeles. I arrive with the usual prejudices of a smug New Yorker: too many cars, of course; suburban sprawl under a blanket of smog; mindless, laid-back surfers; rampant poverty in the African-American and Latino neighborhoods, where street gangs flourish, and the Hollywood community, which, Fred Allen also observed, oozes enough sincerity "to fit in the navel of a flea, with room left over for three caraway seeds and the heart of a producer."
It seems only fair to take a closer look.
Posted by RICHARD POLLAK at 12:01 AM 1 comment: Links to this post