The escalator at the Civic Center Metro station leads down to a mezzanine that would accommodate a tennis court, or even a modest touch football game, with plenty of aerial space for passes. The marble floors gleam a welcome under bright lighting, no graffiti scars the premises, wall advertisements are unobtrusive and widely spaced, instructions on the ticket vending machines are clear in both Spanish and English, a map of the Los Angeles rail system tantalizes, and one of the immediate neighborhood points the way to Frank Gehry's Walt Disney Concert Hall, the Dorothy Chandler Pavilion, and the area's other cultural nodes. It is 10:30 on a Tuesday morning. I am alone.
I fear that perhaps the gleaming station is not yet operational, then a single woman hurries by and through a turnstile. I follow, waving at the glowing electronic reader my newly acquired, Visa-size TAP card, a magic wand that provides a month's unlimited rides on trains and buses for $14, should you have the good fortune to be at least 65. Down one more escalator a dozen passengers wait on the platform under six life-size bodies suspended from the curved, vaulted ceiling. These fiberglass replicas, each modeled on their creator, the artist Jonathan Borofsky, hover like supermen in mufti as recorded birdsong fills the air. 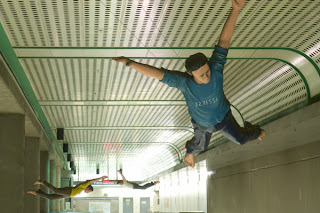 This station is a haven for someone hardened by 45 years of scrum in New York's pinched, cacophonous subway; it is also a clean, spacious retort to friends back home who, when I told them I planned to find my way about L.A. by train and bus, said: Really. I didn't know L.A. had any public transportation. Most Angelenos I've met so far are even more taken aback, at least those of fair skin.  One said, simply, I've never been on the trains. Another warned: Be very careful, and please don't go down there at night. A woman who has lived in the city for some three decades but is considering a move back east, offered a skeptical look, and said, Only maids use the buses.
I am waiting on the Red Line. A train arrives on the dot of the platform clock's promise; I take it two stops, to the Seventh Street-Metro Center in the heart of downtown, for a transfer to the Blue Line. (I reserve the Purple, Green, Gold and Orange strands for future outings.) While I wait for the train to Long Beach, more artwork invites inspection, especially Intolerable Beauty, photographs along one wall that depict the detritus of our consuming passion: disused shipping containers, discarded oil drums, piles of pancaked cars, a mountain of discarded cell phones, crushed metals baled like hay, all in a kaleidoscope of colors. As I travel it becomes clear that many of the 70 Metro stations constitute a fascinating underground museum.
I was a rare Anglo on the Red Line, and am even more in the minority as the Blue Line train surfaces hard by the Staples Center, the city's sports mecca and home of the Lakers, and starts its above-ground run to Long Beach. A burly man next to me asks softly if I would mind standing so he can lift my seat to reach a plug beneath to charge his cell phone. I oblige, to his polite thank you. He is one of the few African-Americans in the car, the others all Latinos. They nod in sleep or stare impassively; no one smiles, conversation is minimal. As crossing gates drop and rise, we push through neighborhoods of detached, tumbledown houses and flatlands featuring one vast warehouse after another. Disembodied voices advise us, first in English then in Spanish, to keep our feet off the seats and that smoking, drinking and playing loud music in the trains or on the platforms is prohibited. The staccato of rap filters down the car from the other end. A man in his twenties–dark hair, ponytail, bulging backpack–comes through selling candy; he is the only other white person in the car, until he moves on after finding no buyers. The trip to Long Beach and back takes roughly an hour; at no time do I feel remotely threatened.


Back on the Red Line, threading under the more upscale neighborhoods of Hollywood, I meet Rolando, a young man who lives in the San Fernando Valley. He is on his way home from downtown, after driving a friend, grounded because of a DWI arrest, to a court date. Rolando takes out his cell phone and runs a slide show of photos he's taken recently: a wall mural, the DWI friend's cat, and many others. He is very proud of his shots, which he transfers to his computer and then puts up on his Facebook page. I like to look around, to observe, but you can't really do that in a car. Driving makes me tense, especially on the freeways. It's relaxing down here, he says of this rare trip on the Metro, but what choice do I have? It doesn't come close to where I live.

Rolando may not have a choice, but thousands of Angelenos do, yet they opt for their motorized carapaces and the choked freeways. Tourists, too, seem largely absent on the buses and trains, even though they deliver you to within a block or three of most of the city's many lures, from Chinatown and Little Tokyo to Universal City and the the Norton Simon Museum.  Los Angeles is the second largest city in the country but ranks ninth in ridership, despite the billions of dollars spent in recent decades to create an attractive and efficient system.

My good luck. Unlike in New York, there is always a vacant seat.
Posted by RICHARD POLLAK at 8:32 PM 2 comments: Links to this post