An Unexpected Day at the Library

Well before Diane and I arrived in Los Angeles in early January, New York friends better acquainted with the city peppered us with marching orders, commands echoed by the natives once we got here. We must go right to the Huntington in Pasadena to see the “spectacular” botanical gardens, take the tram up to the Getty museum and spend the day at this “incredible” temple of art, don’t forget the Walt Disney Concert Hall, Frank Gehry’s wondrous curves of silver downtown. And be sure to sample the succulent fare at the nearby Central Market, especially the pupusas. They’re the best!
Yes, of course. But first, the Central Library, which I stumbled upon while wandering along Fifth Street one morning after leaving Diane at her 33 Variations rehearsal. I’m a pushover for these sanctuaries, for the smiles of the willing staff, the long wooden reading tables, the weighty dictionaries spread open on their stands, the magazines and newspapers for procrastination, the shelves of books walling out the mundane world, the  comforting hush in the carrel hideouts. Libraries are also the best place to find your bearings in a new city, and–full disclosure–to get an ego boost upon discovering that all five of your books are in the catalog.
A challenge arises as soon as I enter. The convex ceiling above the main lobby explodes with colorful rings, starbursts and checkerboards intertwined, according to the artist, Renee Petropoulos, with the names of contemporary writers. I crane my neck to decipher this 36-foot by 36-foot hieroglyph, to no avail. Even after I read that Petropoulos separated the first and last names in mirroring quadrants, I get nowhere. The man at the information desk has no idea who the writers might be, nor do the two librarians on the literature floor, though one urges me to put in a formal email request for the information. I do, and move on.
En route to the rotunda, the much-heralded centerpiece of the building, I am waylaid by Big Bird and Oscar the Grouch, the former on the down side of a seesaw in front of Mr. Hooper’s store, the latter scowling in his garbage can. This exhibit, drawn from the hundreds of illustrations that graced Sesame Street books and posters, is awash in children squealing in recognition. That’s Grover on the white horse, look at his funny hat, says one budding connoisseur, pointing to the parody of Jacques-Louis David’s “Napoleon Crossing the Alps,” tricorn and all. 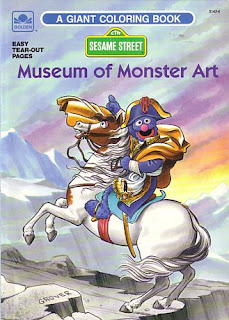 The rotunda is named for Lodwrick R. Cook, who became chairman and CEO of the oil giant ARCO in 1986 and led the fund-raising campaign to restore the library after two arson fires that year destroyed more than 400,000 books. I am dwarfed in this resonate space, an awestruck child gazing up in this literary cathedral at the cast bronze chandelier suspended from the 64-foot-high dome. Hand-painted continents decorate the translucent blue-glass globe at its center; signs of the zodiac ring the sphere, as do 48 bulbs that represent the number of states in 1926, when the building opened. Over the next five years, the magazine illustrator Dean Cornwell, who also drew art for books by Ernest Hemingway, Pearl Buck and others, created large murals high on the rotunda walls, depicting four eras of California history, including the founding of Los Angeles.

I am surprised to see several sets of card catalog drawers on one side of the rotunda. After pulling at two or three of them with no success, I ask the librarian in the children’s literature room a few steps away why they are sealed. They’re not sealed, she explains. They’re just the fronts, which we saved and put on the walls as a kind of homage to how we did things before computers. When I look taken aback by this Potemkin Village, she cheerfully says that if I want to see index cards I should take a ride on the two elevators down the hall.
They are not elevators, it turns out, but “observation pods,” so named by the local artist David Bunn, who papered their walls from floor to ceiling with some of the seven million typewritten catalog cards that technology, in the library’s judgment, had “rendered obsolete.” A tall, narrow window in each pod gives out on the shaft, which is lined with yet more cards, from four floors down to four floors up. These went by too fast to read, but the cards on the walls prove a nostalgic treat, neat white rectangles pointing me to the Complete electric bass player, the Complete Greek tragedies by Euripides, the Complete and authentic life of Jesse James, and, my favorite, the Complete boating encyclopedia.
The doors open, and in walks the phantom of Nicholson Baker. Are you horrified by this wallpaper? I ask. The author of Double Fold: Libraries and the Assault on Paper glowers at the cards, then shrugs.  He’s clearly not pleased, but knows that his book, an attack on the library establishment for trashing its card heritage, is on this very library’s shelves, easily located and reserved with a few pecks on a computer in the main lobby, or on your own at home. Shaking his head, Nicholson fades reluctantly into cyberspace.


I exit the pod into the Tom Bradley Wing, named after the city’s former mayor, and stand on a balcony overlooking a multi-story atrium. Bright sun spotlights the three aluminum and glass chandeliers, charming disks the size of flying saucers on which perch a tulip, a porpoise, an eighth note, an angel, an hourglass and various other amusing pastel adornments. I ask the man who has joined me at the rail about one I can’t identify. It’s a snail, he says, and asks for money. I thank my instructor, hand him a dollar and move away trailing embarrassment.


Like most big city libraries, the building is a magnet for the homeless, a refuge from the cruel streets downtown where toilets are available and the staff is tolerant. These ragged men (and a few tattered women) are everywhere, shuffling aimlessly through the halls or dozing over unread books and magazines as I leisurely explore the library’s beauty. It comes as little surprise that a 2009 study put L.A. at the top of the country’s ten “meanest” cities in the treatment of the homeless.

Before leaving I sit down at a catalog computer in the main lobby and type in the keyword homelessness.  It comes up with 243 hits. Poverty brings 1,821.
Posted by RICHARD POLLAK at 11:18 PM 1 comment: Links to this post