Riding the Rails on a Bus

In my post of January 21, I marveled at the speed with which Diane and I whipped along in the dedicated car-pool lane of Interstate 110 one recent rush hour. As hundreds of lone Angelenos  congealed like clots in an artery, we and a few other well-stocked vehicles moved at a steady 60 mph clip, as if angioplasty had been performed on our lane. A few days later, our home town newspaper, the New York Times, put our exhilaration in perspective.

During the last three decades, car ownership in the country has increased 60 percent, while the population rose by just one-third. Both despite and because of this passionate love affair, car-pooling, that noble experiment in togetherness that found so many adherents during the gasoline shortages of the 1970s, has declined by half since 1980. Back then, according to the U.S. Census, 20 percent of commuters car-pooled and 64 percent drove solo. In 2009, the numbers were 10 percent and 76 percent, respectively.

Like Greta Garbo, more and more drivers want to be alone, even though their creeping solitary confinement adds days to their annual commuting time and steams up their windows with frustration. One loner in the Washington, D.C. area, the Times reported, finds his daily freeway clog so maddening that he has resorted to hand puppets to manage his anger.

You can easily get around Los Angeles without imprisoning yourself in one of the polluting carapaces that the American automobile industry once again is disgorging in profusion (see bailout). Leave your hand puppets at home; just bring a book, magazine or ear buds and you'll be fine. This I discovered again the other day after riding the Red Line to its North Hollywood terminus, there to transfer to the Orange Line train for a run under the San Fernando Valley.

The train turned out to be a bus, which gave me pause until I realized that now I'd be able to see the landscape, though the orange groves that gave the line its name are long gone, dispatched by urbanizing bulldozers. Our sleek, 60-foot-long, articulated transport, called a Metro Liner, soon pulled away from the platform; it was nearly packed to its 57-passenger capacity, but I managed to grab a seat and steel myself for the joust with traffic sure to come on our 14-mile trip to the line's other end, at the Warner Center.

There was no traffic, yet another of the L.A. Metro system's happy surprises, like the commodious Metro Liner itself. We were rolling unimpeded along a converted right-of-way that once belonged to the Southern Pacific Railroad's Burbank branch. Where the tracks had been, two wide, smoothly paved lanes now carry the buses in each direction, drivers waving as they pass as bus drivers do. We moved smartly on this car-free ribbon, slowing only for brief stops at the station, which are spaced about a mile apart.

At Balboa Boulevard, about half way along, I debarked for a look around. Like many Metro station, above and below ground, this one offered a unique design. Set in the platform was an elongated terrazzo oval with decorative images based on aerial photographs and satellite sources. Beneath the images, John O'Brien, the artist, had inscribed: "To get to the other side." I pondered this phrase to no avail, but the images themselves easily fell into place after I inspected the actual photographs, which were mounted vertically on porcelain enamel steel panels: they pictured the section of the valley where I stood, seen from above. 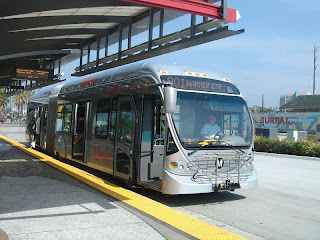 They included the Sepulveda Basin Recreation Area, which, heeding O'Brien's advice, I got to just on the other side of the busway. An exploration on this warm, sunny January day turned up an inviting lake, several ponds, two golf courses, a wildlife refuge and a Japanese Garden; all were pleasant enough, but it was the cyclists who captured my envious attention. They were spinning everywhere, including on the bike path that parallels the busway. I asked half a dozen of these carefree riders if they knew of a nearby shop that rented bikes; all were sympathetic, all said no, then pedaled off on the  kind of terrain that always makes me grateful for the thoughtful flat work of geologic forces.

In some desperation, I put the rental dilemma to the driver after I boarded the bus back to North Hollywood. He, too, shook his head, so I gave up and asked the kind of profound questions reporters ask to break the ice: How long have you been driving a bus? His name was Bill and looked to be in his late forties; he had a ready smile, an easy laugh and the square-jawed fitness of an airline pilot, not the appearance of someone who now told me that before landing this job a few months ago he was homeless.

He said he'd been in the military, flown jets, then settled down to run a land surveying business in the valley. He was divorced and living alone in 2008 when a predatory broker in Bakersfield sold Bill's house to himself at an auction, without any paperwork, and had the sheriff department escort Bill off the property. I had no money to get attorneys to fight it, he said. If you don't have any assets, you're lost.

He tried living with his family in Northridge, but that didn't work out. Next, he moved into veterans housing in West Los Angeles, then to a veterans facility in Long Beach. That's where he learned about the Metro job. He went through a three-week training program at Los Angeles College, followed by a six-week Metro training course, one day on the road, one day in the classroom. Bill now relishes driving the Metro Liner. It's a honey, he said, runs really easy, especially on this straightaway. Did I know, he went on, that Los Angeles County just retired its last diesel bus? I did, in fact, having just read that virtually all the county's 2,200 buses now ran, like this one, on compressed natural gas, the first such fleet in any large U.S. metropolitan area.

The conversion has reduced particulate matter from bus exhaust by more than 80 percent, avoiding the emission of some 300,000 pounds of greenhouse gases a day. Bill proudly ticked off these figures from memory, then said: This baby cost $650,000, but it's worth it, don't you think? Having never shopped for a bus, I demurred, but certainly the powers at Metro deserve high marks for trying to reduce the area's infamous smog, a toxic blanket lone drivers seem bent on making thicker.
Posted by RICHARD POLLAK at 12:52 PM 1 comment: Links to this post