A Spin Along the Pacific

For a number of years, I've been a dedicated–some would say an obsessed–pedaler on the bike path that follows the east bank of the Hudson River from the George Washington Bridge to the Battery, and a sufficiently chauvinistic New Yorker to regard this car-free and carefree 12-mile stretch as the ne plus ultra of urban cycling. However, two days on the South Beach Bike Trail that runs 22 miles along the Pacific have persuaded me that to be fickle is not such a serious felony after all.

Both days–a Wednesday and a Saturday, which I will conflate from here on–were perfect for cycling: temperatures pushing through 70 degrees as the sun, unimpeded by any clouds, gave a pointillist twinkle to the waves curling gently toward Santa Monica's Will Rogers Beach, where I started south. A mini-meadow of yellow bloomed on my right flank. Buttercups, mustard flowers, some other flora? Several fellow pathfinders proved equally ignorant. They're pretty yellow flowers, one young woman said, her admonitory laugh suggesting that I should suspend such horticultural investigations and just enjoy the day. Agreed.


I was riding on fat tires, steering erect with raised handlebars and perched on a cushiony seat. The bike, Made in China, like almost all two-wheelers these days, was called a Comfort, and comfortable it was, far more than my putatively superior, 21-gear Specialized Sirrus Pro back home. I was a teenager again, tooling around Chicago's Jackson Park and the shores of Lake Michigan on my trusty Schwinn. The price was right, too: $15 for the day, from SeaMist Bike Rentals at the base of Santa Monica Pier, the "world-famous" play land that points out to sea like a carny's finger beckoning gullible porpoises.
"Sand Is A Hazard. Be Careful," advised a sign at the shop, but the low-key breezes had blown little of the beach onto the two-lane concrete trail. The greater hazard was the scenery, which lured my eyes off the path right and left, not least to the Annenberg Community Beach House, once the 110-room estate William Randolph Hearst built for Marion Davies in the twenties. Though much reduced because of time's vicissitudes and the 1994 earthquake, the renovated complex retains its white-washed glamor, especially the marble swimming pool, around which Davies frolicked with Gable, Chaplin, Garbo and the rest of her Hollywood coterie, and which is now open to the public. 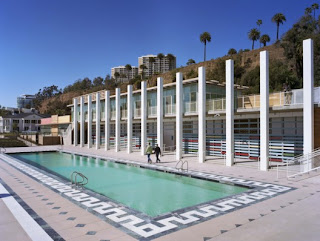 Dramatic palisades looked down on this handsomely rescued history, and out over the neatly raked, pristine beach, where signs decree no drinking, smoking, fires, fireworks, tents, dogs or–happily, because I had no sugar cubes–horses. Volley ball games were rife, the intensity of play vying for attention with the bikinis often leaping at the nets; roller-blade hockey commandeered two parking lots, the puck aimed not at nets but at tipped over oil drums. I did a double-take upon spotting the sun glinting off a bald head protruding from beneath a towel; yes, a masseur had set up a table on the lawn and was working his client's back. At Venice Beach, where the trail began to serpentine, a fleet of skateboarders came hurtling by. I took a break and explored the area.

Entering the promenade that fronts the beach here was like pulling back a tie-dyed scrim and being swirled in a haze of cannabis back to the sixties. All serious nostalgists will find nirvana here. Tattoos and body piercing are available at the House of Ink, and at least four other emporia. One shop selling pipes and bubblers promised no hassles–even, I wondered, if I told them I wasn't quite sure what a bubbler was? I didn't ask one of the several palm and tarot card readers if I had one in my future. Tee-shirts conjured up the dramatis personae of those noisy days that are now, incredibly, almost half a century distant: Angela Davis, Bob Marley, Pink Floyd, Jim Morrison and the Doors. A guitar-strumming busker sang "Just Like a Woman," from Dylan's seminal Blonde on Blonde (1966).

As I listened, a young woman passed on roller blades, shouting over her shoulder: I'm telling you the fucking truth; my God, I'm gonna punch you! The object of this communication, a young man sans wheels and breathless from trying to keep pace, looked pained. They seemed good candidates for a counseling session or two with Eliyahu Fink, rabbi of the Pacific Jewish Center, which bills itself as the "Shul on the Beach," and sits amid the psychedelic parade like the Save a Soul Mission among Nathan Detroit's crapshooters.


At the southern end of Venice Beach, the yachts and looming hotels of Marina del Rey forced a detour inland, as if by real decreto. This proved a nuisance, as it required a certain amount of jostling with traffic on Washington Boulevard, the clearly marked bike lane to the contrary notwithstanding. But I quickly reached Yvonne B. Burke Park, where on new-mown grass I extracted a muenster and tomato sandwich and navel orange from my backpack and dined royally while fellow cyclists rolled by waving.
After skirting Marina del Rey, the bike path hugs the beach again, and also the western edge of Los Angeles International Airport. The roar and lift of aircraft, so exciting 65 years ago when I stood on the observation deck of Chicago's Midway Field, was now a noisy intrusion on my quiet ride. I turned around, vowing to cover the rest of the trail another day.

En route back to SeaMist Bike Rentals, I passed a man sitting at a card table on which three identical signs read: "Free Advice." I considered asking if he thought my distaste for the racket of jet and internal combustion engines was unreasonable in the 21st century, but that seemed to invite a lengthy and possibly contentious discussion, so I pedaled on. A better way to spend three hours I do not know.


POSTSCRIPT
In my previous entry, about the Orange Line busway in the San Fernando Valley, I wrote: "We moved smartly on this car-free ribbon, slowing only for brief stops at the station, which are spaced about a mile apart." Make that stations. . . . For those who think I am alone in my enthusiasm for getting around Los Angeles via public transportation, please meet Necee Regis, whose recent Washington Post article on her bus explorations in the city is here.
Posted by RICHARD POLLAK at 2:49 AM 1 comment: Links to this post