A Jazzy Night at Disney Hall

Contrary to cynical wisdom, some things really are as good as they're cracked up to be. I'm not talking here about long-ago certified astonishments like the Mona Lisa or Don Giovanni or Joe DiMaggio's 56-game hitting streak. I mean new things, in this case the Walt Disney Concert Hall, Frank Gehry's soaring flight of brushed stainless steel curves in downtown Los Angeles. It opened in 2003 to resounding applause, and I enthusiastically added my own on a first visit the other night, for a performance by the Los Angeles Philharmonic, which, after the intermission, combined with New York's Jazz at Lincoln Center Orchestra for a finale that was as ambitious as the bold architecture and left us all cheering.

I was shouting bravo under my breath even before Leonard Slatkin, the conductor for the evening, lifted his baton. That's the effect the hall had the minute I saw it atop the city's Bunker Hill, the sun sparkling off Gehry's dramatic design. That joy only grows when you enter the lobby, with its walls and tree-like columns of Douglas fir and vaulted space for chamber music and pre-concert lectures, where undulating walls of acoustical paneling rise to one of the structure's four skylights. When I arrived, some 200 people were seated in this cathedral listening intently to a local composer, Veronika Krausas, discuss the evening's program, her remarks interspersed with taped snippets; these included a passage from An American in Paris transcribed for piano roll, the tempo so fast I felt as if I were in a taxi racing to catch a train at the Gare du Nord. 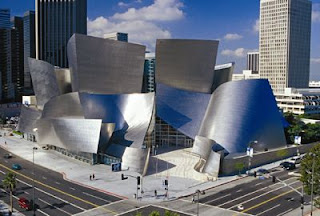 More swaths of Douglas fir envelop you in the main auditorium, which seats 2,200 people but seems intimate nonetheless. The raked seats rising gently from the stage, together with the rows on the flanks of and behind the orchestra, give the impression of a small, well-tended vineyard. No private boxes look down on the hoi polloi, a worthy bow to egalitarianism undercut somewhat by ticket prices. (For a seat quite distant from the stage, mine was $103.) Gehry's signature convexities are everywhere you look, a serendipitous blessing that provides not only a stunning interior experience but acoustic bounce that produces a sound that players, audiences and critics have all lauded as among the best in any concert hall, and that I now discovered myself.

Slatkin got the evening off to a calm start with the Suite for Jazz Orchestra (No. 1) by the the 28-year-old Dmitri Shostakovich.  Given what would come from this Russian master so often beleaguered by Stalin–not least his 15 symphonies and 15 string quartets–the suite is an 8-minute trifle, but a charming one. It was commissioned by a Leningrad dance band in the 1930s and reflects in every tune the young Shostakovich's affection for pop and folk music, and also his attraction to unorthodox instrumentation. To the surprise and delight of most of us, the small ensemble included three saxophones, a banjo and a Hawaiian guitar, which in the final movement, marked "Foxtrot," gave us a whimsical riff while a trombone slithered about underneath. 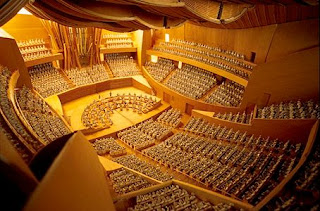 As stagehands added more chairs to accommodate the additional forces for An American in Paris, I realized that in all my years of concert going I had never encountered this "rhapsodic ballet," as Gershwin, in 1928, called this "most modern music I have ever attempted." I knew and loved the work from the Gene Kelly-Vincente Minnelli film of 1951, and I'd listened to the soundtrack and fuller recordings countless times, but I'd never heard it in a hall. I was primed, and within a few measures it was clear that Slatkin and his charges were too.

They made us all Americans in the City of Light–sitting in cafes, strolling along the Seine, dancing, homesick at moments–as Gershwin's taxi horns barked their staccato and his jazzy, bluesy breakthrough orchestrations filled the auditorium with their dense, exciting harmonies. I wasn't seeing Gene Kelly and Leslie Caron in an MGM Paris but hearing a thrilling new concert piece, "A Tone Poem for Orchestra," as Gershwin subtitled the work. "At the conclusion," he wrote, "the street noises and French atmosphere are triumphant." And so they and the orchestra were, to shouts of approval from the packed house.

Uh-oh, 55 minutes, I thought, as I read in the program how long Wynton Marsalis's Swing Symphony (Symphony No. 3) would require our attention. After all, Gershwin had needed only 17 minutes to wrap us in Paris. The stage was now almost overflowing with musicians, an amphitheater with Philharmonic players in black evening dress surrounding the jazz orchestra, whose 15 musicians sat before the podium in white shirts, dark ties and dark suits, the bassist and drummer with jackets off. When Slatkin walked out, I wondered where Marsalis was. This was his composition, why wasn't he conducting?

He calls the work a "symphonic meditation" on the evolution of swing, and there was plenty to think about in its rhythmically and harmonically complex six movements. They take us, with frequent and demanding solos in both orchestras, from ragtime through the Charleston twenties, the call and response of Kansas City swing, bebop, the contemporary sounds of Miles Davis and John Coltrane, to an eclectic last movement that ends with a brief trumpet cadenza and final sigh by the two orchestras. By this time I had figured out, thanks to the opera glasses of my neighbor, that the cadenza wizard was Marsalis, who had been playing and listening with considerable animation in the band's trumpet section.

Jazz, Marsalis has written, "is the collective aspirations of a group of musicians, shaped, given logic, and organized under the extreme pressure of time. When we all work together, it swings, and when we don't, it doesn't." It did, and then some, not least because Slatkin and Marsalis had synchronized their musicians with precision and brio. After the composer took his bows we refused to let him leave without an encore. He gave us a generous, muted blues jam, in which he and the other members of his group each improvised a brief solo, as Slatkin, his back to the audience, sat on the podium beneath his music stand leading the applause after each turn.
Posted by RICHARD POLLAK at 1:15 PM No comments: Links to this post