In the Wondrous Land of the Buddha's Hand

When you're on an extended wander, an invitation to a meal in someone's home is like arriving in port after months of hardtack to find that you're expected that evening in the dining hall of the baronial estate high above the harbor. So when John Steinmetz and Kazi Pitelka asked us to dinner, we happily accepted, though we had met only once several years ago, when he, a bassoonist, and she, a violist, performed at the Skaneateles Festival in New York's Finger Lakes region, where Diane was then the artistic director.
They live in Altadena, a quiet residential community just above Pasadena at the foot of the San Gabriel Mountains, whose snow-capped peaks, glistening in the westering sun, greeted us as we approached on the freeway. John had suggested we come early to see their garden, a proposal that had given me pause. I'm a city boy whose horticultural history does not extend much beyond pulling a few weeds and carrots from the Victory Garden in our postage stamp backyard in Chicago during World War II. Diane's thumb is a touch more green, enough so to nurture three or four window plants in our New York apartment, but her instrument of choice is the piano, not the trowel. We pulled up to John and Kazi's house, a one-story Spanish colonial of cream-colored stucco with brown trim, just before five o'clock.

John ushered us in through the welcoming blue door, and after reunion hugs we moved, with drinks in hand, into the garden to catch the fading light, Kazi leading the way. She is a tall, ample woman nearing sixty whose brio echoes her size and who immediately began plucking leaves for us to smell, handing them over like like a proud chef serving up a tasting menu. One was allspice, which until that moment, I confessed with some embarrassment, I had thought was an an all-purpose concoction you shook out of a bottle, an ersatz spice dreamed up by Kraft Foods or some other megaprocessor.

One sniff of curry leaf and I was opening takeout from the Indian Cafe in New York. Next came hoja santa, which means sacred herb in Spanish, is used by Mexican cooks to wrap tamales and flavor fish, and smells like . . . licorice? anise?  Couldn't tell.  The kaffir lime leaf spoke immediately of the delicious Pad Thai I had tasted only days before at a restaurant on Wilshire Boulevard. The Australian finger lime was less a leaf than a small, dark pod, which when squeezed produces a yellowish eruption that chefs covet because it looks like caviar. At the risk of flunking the entrance exam to Le Cordon Bleu, I avow that it tastes better, too.

In only a few steps, we were in a mini-orchard hung with Surinam cherries, rose apples, pears, peaches, quinces, tropical guavas, cherimoya, and, depending on the season, Hass, Fuerte or Mexicola avocados.  A parade of citrus trees offered our pick of oranges–Valencia, Seville, marmalade, blood, navel–as well as satsuma mandarines, tangelos, tangerines and lemons. Pointing to yet another dangling sphere, Kazi said it was an oro blanco, a cross between a grapefruit and a pomelo, noting that the latter, the biggest citrus there is, can reach the size of a basketball. Kazi then showed us a Buddha's hand, which with its profusion of yellow fingers looked less like a fruit that the Chinese use to perfume rooms and whose zest is prized for cooking than an appendage gone astray from Ripley's Believe It Or Not on Hollywood Boulevard. 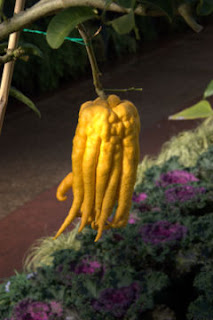 There were two beehives all abuzz, sugar cane poking up against a fence, and, of course, the kind of garden variety garden that was all I had ever expected, its winter crop featuring kale, broccoli, cauliflower, root vegetables, peas and arugula; seeds for tomatoes, lettuce, radishes and other summer stalwarts would soon go into the ground. A pen full of hens and three or four turkeys squawked as we approached. Kazi smiled as she recalled not picking her plums on time and finding them overripe and inedible on the ground. I just threw them over the wire and the birds gobbled them up, she said, They love fruit fall. Thus did I learn that a fowl's diet extends beyond feed and the occasional pebble.

This description may leave the impression that we were walking the back forty. In fact, Kazi's garden takes up only half an acre, about the same space as many of the ubiquitous swimming pools and mandatory deck chairs hidden behind the homes of Beverly Hills and other gold-plated redoubts in Los Angeles.

Back inside, John refreshed our drinks as we sat at the island in their commodious kitchen. He is a composer and lecturer as well as an accomplished bassoonist, and the author of How to Enjoy a Live Concert, in which the following reassurance appears: "Concerts are no weirder than any other pastime, and the rules of behavior are much simpler and easier to understand than, say, the stock market, football, or systems software upgrades." He, too, is approaching sixty, signaled by the graying of his ponytail, which I remembered from Skaneateles.

As we all talked, I watched Kazi the Gardener transition to Kazi the Cook, handing out hors d'oeuvres preserved from last summer's harvest–grilled eggplant, lemon peel, herbs and garlic, and grilled green and red peppers with garlic and olive oil, both overflowing their crisp toast platforms–and preparing the meal to come. I do a modest amount of cooking myself, usually following recipes that always seem to call for a tablespoon, and sometimes a cupful, of swivet. Kazi kept up with every turn of the conversation while navigating the kitchen as if she were about to serve nothing more than four bowls of corn flakes.

The first course to arrive after we migrated to the dining room set the citrus tone of the meal, a tangy salad of thinly sliced lemon, fava beans, parsley, endive, shallots, and oil cured olives. Next came perfectly roasted game hens, marinated in orange and lime juice with generous dollops of oregano, thyme and garlic from the garden. The adjacent rice had been cooked with whole coriander seeds and bay leaves and flavored further by juice from the roasting pan. As we sagged with delight, Kazi brought out plates of lavender orange and almond cake, a dessert that made me want to eat well beyond the assignment.

Coffee or tea? she asked, as we lingered at table talking politics, music, theater, books, and of our kindred decision several years ago to cease watching television, a move that we all agreed had improved our lives considerably. Diane and I opted for herb tea, which Kazi created on the spot, steeping rosemary, Meyer lemon juice and a touch of agave syrup, which provided a fine citrus snap to the meal's end.

Two night's later, Kazi was in the pit at the LA Opera, where she is principal violist. I was in the first row of the balcony for this staging of The Turk in Italy, a rarely performed Rossini opera with much to recommend it and make you cheer. I did so heartily for the singers as they took their curtain calls, and though I couldn't see her from my distant perch, for Kazi, too.