A Festive Farewell to Los Angeles

33 Variations, the play that brought Diane to Los Angeles in early January, ended its limited run on March 6 and there was, as is traditional after final curtains, a party. The cast and crew hugged and kissed, speculated about rumored productions in London and Sydney, drank a little too much, said their sometimes teary goodbyes, and promised to keep in touch. But before this ritual played out, Gloria Steinem appeared like a mystery guest and saluted the seven actors and Diane, who had played Beethoven's Diabelli Variations at each performance.

The reason for this cognitive dissonance was a fund-raiser for the Women's Media Center, about which more in a moment. Several dozen of the center's supporters had just seen the last show and now filled the Grace Salvatori Salon of the Dorothy Chandler Pavilion, applauding as the cast gathered around Steinem, Jane Fonda crouching in front, like the batboys in team photos, had batboys been in their early seventies and worn boots up to their knees below black mini-skirts.

Less than an hour earlier, Fonda had slowly died of amyotrophic lateral sclerosis (Lou Gehrig's Disease) for the second time on this Sunday–as she had eight times a week for the past month-plus, and for even longer on Broadway in 2009–playing a musicologist racing against the illness to discover why Beethoven had become so obsessed with an "insignificant" waltz by the Viennese music publisher Anton Diabelli. Now she had transformed into her movie star self, her laugh energizing the room, her ALS collapse replaced by a pine-tree posture that made her look fit enough do fifty crunches on the spot.

Beside Fonda and Steinem (I plead your indulgence here; in fifty years as a journalist, I've never satisfied a secret desire to boldface a few names), Forest Whitaker was on hand, curious about how Moises Kaufman, who wrote and directed 33 Variations, melded music and narrative; the actor told Diane he hopes to do something similar in a project about Louis Armstrong.  Warren Beatty and Annette Bening were in the crowd, too, apparently having walked up to the box office at the last minute and bought tickets, like any other civilian Angelenos. Gustavo Dudamel, the Venezuelan sensation who is now music director of the Los Angeles Philharmonic, was in the audience for the final performance but did not come to the party, much to Diane's disappointment.

Now that I've got the hang of it, and as an homage to the late Irv Kupcinet, whose column in the Chicago Sun-Times my father devoured every morning with his breakfast, here are a few of the other large or medium-size names who saw the play during its L.A. run: Kevin Spacey, Joey Heatherton,  Cher, Laurence Fishburne, Stacey Keach, Larry David, Angelica Huston and Julie Hagerty, who with the rest of the farceurs who populated the film Airplane! made Diane laugh so hard three decades ago that I knew I had to marry her.

By far the premier name was Stephen Hawking, who has battled amyotrophic lateral sclerosis for half a century while becoming perhaps the preeminent physicist of his time. He came backstage after seeing an early performance and was immediately surrounded by a hushed cast and crew as he presented a bouquet of roses and carnations to Jane. Minutes after rising from the wheelchair she used in the second act, she knelt by his. Laboriously, Hawking began using his hand to operate a switch that allowed him to slowly create the words he wanted on the computer screen attached to the chair. 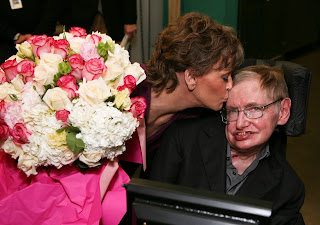 Jane saw the message coming and, before Hawking could finish it, announced to the assembly: You were my heartthrob. Her fan blushed and slowly completed the sentence on the screen, which the computer's male voice then confirmed aloud: You were my heartthrob. After they both agreed that this infatuation dated to the late sixties, Jane's Barbarella period, she asked, with a laugh, And what am I now? Chopped liver?


She is not on many fronts, not least as co-founder of the Women's Media Center. She, Steinem and the feminist author Robin Morgan started the organization in 2005 to focus attention on how underrepresented women are in most newsrooms and how canted coverage is toward males and their points of view. That was the pitch at the party, one substantiated by numbers like these:


After the WMC made its worthy point, the party gradually broke up and the cast–Don Amendolia, Zach Grenier, Susan Kellerman, Greg Keller, Samantha Mathis, Grant James Varjas, Jane and Diane– trickled down to a nearby brasserie, where the closing festivities began in earnest and continued well into the morning. Diane and I stayed long enough to be cheered on what was, coincidentally, our 29th wedding anniversary. Reason enough to be hugged by the leading lady. 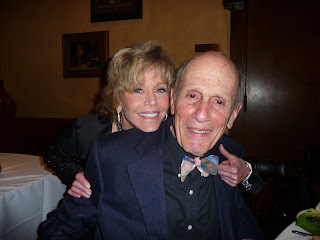 Two days after this finale Diane and I ended our Los Angeles stay and set out north along the California coast, still with too much baggage but happy to be on the road again.

Posted by RICHARD POLLAK at 8:35 PM 3 comments: Links to this post