The woman standing on the corner in downtown San Luis Obispo had no idea where the post office was. She didn't live in the area, she explained apologetically; but before we could drive off, she plucked out her cell phone and called a colleague who did. After a brief exchange, she pointed down Marsh Street, where we were already idling, and said our quarry was just two or three blocks away on the right.
At the post office–where we mailed a UC Santa Barbara shirt to our friend David, who collects such college garb, and a book to Rex, our 6-year-old grandson, a newly minted reader–the clerk was equally helpful and cheerful. Despite the line of patrons, who were also good-natured and patient, we were out in minutes, and soon browsing across the street in Barnes & Noble, where piled high in in a window were copies of a book published last year entitled Thrive.
This volume, it turned out, anoints San Luis Obispo as the happiest community in the United States. The author, Dan Buettner, bases this judgment heavily on a 2008 Gallup-Healthways study, which found that the 44,000 citizens of this central California community enjoy "stratospheric levels of well-being." He buttresses this source with anecdotal evidence gathered on a visit to the city, e.g., interviews with several contented residents and the willingness of his B&B host to loan him a bike without requiring that he leave his credit card as collateral.
Now, I, too, once borrowed a bike, for several days, at a B&B, near Stratford, Ontario, and at no time did the proprietor make me feel I risked beheading if I absconded with his two-wheeler. In short, it is easy to be skeptical of Buettner's pop sociology, with its suggestion that we have seen the future and it is San Luis Obispo. But, in fact, SLO, as the city likes to refer to itself and its pace, does seem to be a rather happy place, as does the rest of the central California coast we have been visiting since heading north from Los Angeles on March 8. 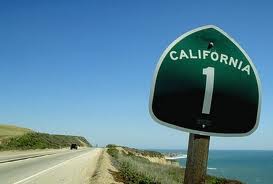 Despite the primacy of cars in this most vehicular of states, drivers stop at crosswalks for pedestrians, who match this restraint by staying on the curb until the light bids them "Walk." For someone schooled in the street scrum of Manhattan, this courtesy seems almost otherworldly, as if an invisible and caring puppeteer were controlling the traffic. In Santa Barbara, our first stop, this politeness had an immediate calming effect on my normal sidewalk behavior, which at home moves me to mutter sotto voce, when trapped behind innocently strolling visitors, "get cracking, people, don't you know you're in New York City?"

What impressed me most about Santa Barbara was its commitment to getting people out of their belching carapaces, especially us tourists. "Take a vacation from your car," urges the Car Free Project brochure, "and discover greater Santa Barbara on foot, or by bicycle, boat, bus, shuttle or train!" We happily left our car parked behind our B&B for three days, while we walked the town and went for exhilarating pedals along the Pacific, which washes the coast at every turn with the healing elixir of clean, fresh air.

When we again confronted our Chevy, the great white whale we had foolishly rented in Los Angeles, we both wanted to harpoon it. Instead, we pleaded for a downgrade at the local Avis counter, where Clancy, likely the jolliest rental agent on the company roster, assured us sympathetically that he'd have something the next day. We drove off in the morning in a peppy Volkswagen Jetta that, unlike Moby-Dick, offers satellite radio and seems never to require refueling, an illusion that allows us to feel we are saving, if not the planet, at least a few blades of grass along the highway.

As we pushed north, Diane suggested that Clancy's enthusiastic and accommodating attitude, like that of everyone else we were encountering along the coast, might be due to their relief over having a job at all in these times of 9 percent unemployment. Perhaps, but I think it has more to do with an ingrained sense of harmony with the vast Pacific at their doorstep and the low mountains that rise from the ocean under a gently undulating mantel of brilliant green.

Vineyards dot this stunning landscape everywhere you look, spread on the slopes like swathes of wide wale corduroy. Their tasting rooms teem with very happy patrons, one of whom was Diane, who tried her palate at the Cypher Winery, an iconoclastic operation south of Paso Robles. The bright red chandeliers of blown glass hanging over the tasting bar looked as if three Medusas had been suspended from the ceiling by their heels. On the wall opposite, Moliere offers this apothegm: "I prefer an interesting vice to an annoying virtue." 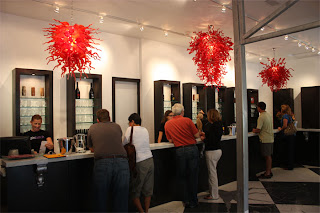 Diane sipped a Naked Chardonny; two Rhone blends, one labeled Peasant, the other, Anarchy; a Malbec blend called Monarchy, and, finally, a Loco Tempranillo from the Tres Cojones Vineyard in nearby Templeton.  I don't imbibe, mainly for medical reasons; even if I did, I suspect I would lack the courage to try a drink billed, as Loco is, as a "massive, massive wine. Big fruit, big structure, big balls– in fact three. On the palate, big black fruit that seems to resonate with angst." Diane seemed anything but anxious after setting down her glass, but I drove back to our motel.

En route we passed several cyclists, as we did every day when driving or walking through the hills. Single riders pumped up hills or highballed down, the occasional ponytail flying in the wind. Pairs of usually more elderly pedalers rolled along leisurely, sometimes on tandems. Pelotons flashed over flat, car-stingy back roads, two- or three-dozen determined young men (mostly) bent low over their dropped bars, as if heading for the finish line on the Champs-Elysees. 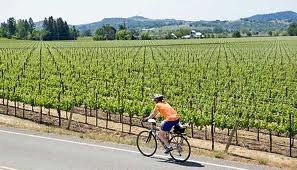 The central coast is a paradise for bikes, which plays no small role in the general contentment. I concede that this is a subjective claim, since I'm seldom happier myself than when breezing along on one of these quiet, non-polluting machines, which haven't changed fundamentally since the 19th century. I welcome the implicit support of Dan Buettner, who, in Thrive, quite wisely taps Denmark–the paradise for bicycles–as one of the three other happiest places on the planet.

The other two are Monterrey, Mexico, where we've never been but have now put on our list, and Singapore. Authoritarianism with a happy face? We'll be there for a week beginning April 7.

Postscript
My longtime friend Jay Baraff has gently chided me for giving Jane Fonda and other stars the boldface treatment in my previous post but not the rest of the cast of 33 Variations. Quite right, so here they are again: Zach Grenier (Beethoven), Don  Amendolia (Diabelli), Grant James Varjas (Schindler), Susan Kellerman (Gertie), Samantha Mathis (Clara) and Greg Keller (Mike), and, yes, Diane Walsh (Pianist/Music Director).  Bravi! . . . . In the same post, I misspelled both Anjelica Huston and Stacy Keach, reason enough to resist all boldfacing impulses in the future. I also failed to credit Ryan Miller/Capture Imaging for the photograph of Jane Fonda kissing Stephen Hawking. Apologies to all.

Posted by RICHARD POLLAK at 11:53 PM No comments: Links to this post