Of Divas and Artichoke Queens

I had planned to report this week on the much-touted stretch of California's Route 1 that hugs the Pacific through the natural glories of Big Sur and into Carmel and Monterey, which Diane and I were traveling for the first time. Then the rains came and, on March 16, triggered what the state's Department of Transportation called a "slip-out," a term that seems a trifle calm for describing . . . . 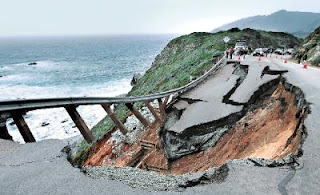 . . . . a landslide that crumbled a 40-foot section of the highway. The collapse, just north of Big Sur, may have surprised and disappointed us, but at least one veteran of the much-repaired 91-year-old road seemed to take the washout for granted, noting that the highway was "stapled and Scotch-taped" to the cliffs. Having packed not even a thumb tack, we took the recommended inland detour: CA 101, which runs flat and straight as a ruler and, though more prosaic than our original choice, delivered us by late afternoon to Salinas.

Serious rain began falling as we checked into the Holiday Inn Express, moving us to hunker down for the evening and consult the online menus of nearby restaurants that delivered. Salinas being the lettuce capital of the world, we ordered salads. While we waited, I thumbed through a tourist magazine and learned that the area was also known in some quarters as the artichoke capital of the world, and that in 1947 one Norma Jean Mortenson, soon to be repackaged as Marilyn Monroe, was crowned Artichoke Queen.

We awoke to more rain and a date for the Saturday matinee of Lucia Di Lammermoor, live in HD from the Metropolitan Opera. This required that we drive a half-hour to the Century multiplex in Monterey's Del Monte Shopping Center, where the march of corporate homogenization made us feel right at home: an Apple Store, a Whole Foods, and a Pottery Barn sat right near the theater, as they do near the Met's home at Lincoln Center in New York.

Because of the three-hour time difference, the proceedings began at 10 A.M., marking the second time I had seen the remarkable Natalie Dessay at that early hour. A few years ago, I fell in love with her sassy, hilarious Marie in Donizetti's La fille du regiment, in a packed movie theater in La Jolla. The composer's crazed Lucia is the polar opposite, but Dessay made the transition so convincingly she might have been two different singers.

After murdering Enrico, the man she has just been forced to marry, and still believing that her true love, Edgardo, has been unfaithful, she descends a long staircase, her wedding dress now bloodied, and sings the famous mad scene like the woman possessed that she is, her coloratura making the heartbreak and rage almost palpable. "Amazing," whispered a woman sitting behind us, as the cheers rang at the Met and among the 400 of us sitting in the Century. The same enthusiasm greeted the tenor Joseph Calleja, whose Edgardo made one think of the young Pavarotti.

(Confession: Because the opera didn't break until almost 2:30, Diane and I shared a small bag of popcorn after Act II; I hope we mitigated this movie house indulgence by finishing it before Patrick Summers, the day's maestro, raised his baton for Act III.)

The rain continued on and off the next day, when we reported for the next stage of our expedition. I soon found myself living on uncombed grounds amid encroaching woods like those at Camp Martin Johnson, the sleep-away retreat in Michigan where I played capture-the-flag when I was nine; bunking with Diane in a room that measured six strides by six and could reasonably be compared, with not too much imagination, to a prison cell; dancing the box-step, grapevine and penguin to a boombox foxtrot, at 7:30 in the morning on an empty stomach; and listening to the cheerful shades of John Steinbeck, Jack London and Ogden Nash describe their lives in considerable and amusing detail.

But that's a story for the next post.
Posted by RICHARD POLLAK at 1:57 AM No comments: Links to this post