When I was a post-toddler, my mother required that I sleep without a pillow because, she explained, she didn't want my head to grow on crooked. This was during the the thirties, when times were even harder than they have been lately, so it is possible that she wasn't really worried about my developing spine but covering for our being unable to afford an extra pillow, though, as I recall, we did own a car. Whatever her reason, I have been irritated by fat pillows for many decades.

Since arriving in California on January 7, we have slept in ten different beds, some as large as soccer fields and all of them comfortable, save for their pillows. They have ranged in size from the cotton bale lifted by Joe in Showboat to the Graf Zeppelin, most of them as hard as bags of cement. There are always at least four of these punitive cushions on the bed, and sometimes six, including on occasion bolsters that rival a rolled up kilim. 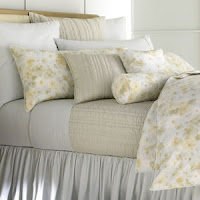 Diane shares my view of this pillow conspiracy, but rather than bleat about it she early on took corrective action, which is her (but rarely my) way. After several restless nights at the beginning of our travels, she went online to the Vermont Country Store, which proved altogether understanding. "Know the feeling of an overly fat pillow?" the site asked. "We do and it's called a pain in the neck." The slender pillows arrived promptly and served nicely during the two months we resided at the Oakwood apartment complex in Burbank, while Diane was performing in 33 Variations. But after the play closed March 6, our nomadic life began in earnest. What to do?
Easy, said Diane, who took a large scissors to one of the pillows, cutting through its cover and polyester inside as easily as slicing in half a boule of sourdough bread. Next, she patched the open seams of the two halves with strips from a white cotton bandana: thus, two small, packable travel pillows. These homemade marvels came with us from B&B to inn to motel to the Elderhostel bunks I described in my previous post, encouraging slumber at every stop, though it was sometimes a problem in the smaller rooms to find space to stash the bed's seraglio inventory.
We fly from Los Angeles to Singapore tonight (April 5). I am somewhat concerned that the security folks at one of the airports may inspect our luggage and think we are running a hot pillow ring. It is a risk we must take. The elapsed time of our passage from L.A. to Singapore, counting the pause to change planes in Hong Kong, is about 20 hours. I have no intention of trying to deal with that kind of jet lag without my wee pillow. I like to think my mother would have understood.
Posted by RICHARD POLLAK at 11:07 AM No comments: