Like most western travelers in developing countries like Vietnam, I suspect, we are wary of the care available should we find ourselves in a medical pinch. This anxiety was not altogether alleviated by the presence, in the yard of a roadside pharmacy in Hoi An, of a brood of chicks chirping with great agitation. Possibly about Avian Flu?

We had come to this coastal resort, a UNESCO World Heritage Site just south of Da Nang, to explore the unique fusion of wooden architecture of the former international port, but also to escape the cacophony and pollution of Ho Chi Minh City and pamper ourselves for a few days after almost four months on the road. The balcony of our spacious room at the Riverside Resort and Spa looked out across the serene Song Do River to a distant, silent century: a fisherman with nets, and women in cone hats behind lumbering water buffalo working a bright green rice paddy. 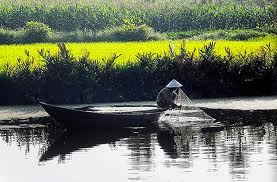 There were shuttle vans to town and the beach, a pool shaped like a Shmoo that had been pinched at the waist, bicycles for the taking, massage tables and chairs in a thatch-roofed hut open to the breeze, a dining terrace where the menu had been given high marks, and a snooker table just above where the click of balls promised post-prandial hustling.

We were primed. But on the second afternoon, Diane took to bed with acute stomach cramps and a high fever, and by the following morning her debility was so severe that I asked the front desk to call a doctor.

Tran Quang Dung came within the hour. He was about forty, slim and, like almost all Vietnamese, soft-spoken and polite. Dr. Dung (pronounced Young) seemed to sense our misgivings; as he unpacked his two black bags, he assured us that he had trained in France in the 90s and was now associated with the polyclinic hospital in Hoi An. He didn't wash his hands before examining Diane, a lapse I let slide since my white-coated doctors in New York have skipped this hygienic step on occasion, though it did occur to me that Dr. Dung may well have arrived on a motorbike.
After asking Diane some routine questions, taking her pulse, listening to her heart and palpating her stomach, he diagnosed gastroenteritis and told her to roll over on her side. This she did, her plea of earlier in the morning–"Whatever you do, Dick, don't let him give me a shot!"–overruled on the spot by Hippocrates himself. Out from a sterile plastic sleeve came a hypodermic needle, into Diane's flank went Buscopan, which soon controlled her stomach cramps.

Dr. Dung also dispensed from his well-stocked bags Cipro, an antibiotic; Flagyl, for parasites, and Tylenol, for fever. Before departing, he told Diane not to drink the water (she hadn't) and to stay away from street food (she hadn't), and to call him on his cell phone at any time if she failed to improve. His house call, a phenomenon in the United States as obsolete as trepanning, cost 1.8 million Vietnamese dong, or $80, medicines included.

Within 36 hours, Diane was up and sitting in the shade by the pool, along with our fellow guests, most of them Australian, British, German and French, and all, like the two of us, various shades of pale. While they baked and browned, young Vietnamese women sped past the gate on their motorbikes, their faces masked and bodies wrapped from head to toe against the sun.

The next day, as waves rolled onto the beach from the East Sea, a 27-year-old woman named Thi approached our umbrella, her 3-year-old son Doin in tow. She was selling necklaces, bracelets and other inexpensive beaded jewelry. She wore a hooded sweatshirt, blue jeans and purple gloves; socks carefully hid the skin exposed by her flip-flops, and her winning smile emerged from under a broad-brimmed cloth bonnet. Her face mask was temporarily askew so she could chat.

Thi's English was quite good, and while Diane examined her wares, I asked how she and so many other young women could stand mummification on such blistering days. After admiring Diane's fair Irish skin, she said: "The sun is bad. You must try to be as white as possible if you're a woman in Vietnam, or you can't get a good job, like in a hotel or with an airline." Even if you are the right tint, she added, keeping an eye on Doin, who was playing in the sand, you still need connections to land the better jobs. "I have none," Thi said. "I come from a small fishing village down the coast; I've been selling on the beach for twelve years."

Some of this was doubtless part of Thi's sales pitch, but the essence of her story is altogether plausible. Vietnam has been a patriarcal and class-bound society for centuries, and communism, for all its slogans about "the people," has done little to make life more equitable for those like Thi who were not born with the right parents or complexion. Diane, trying to do her capitalist part, bought two necklaces and four bracelets, for $35.


On our last night, we took a taxi into town looking for dinner along Nguyen Thai Hoc, a street, lined with historic wooden houses and shops, that had been turned into a pedestrian mall, where only bicycles weaved benignly among us strollers. A stunning explosion of red lanterns greeted us where the street gave on a bridge, casting their reflections on the Thu Bon River. These shimmers were joined in a watery kaleidoscope by a menagerie of giant, glowing floats: a pair of grinning white cats in a basket, a red and yellow dragon on its tail, a yellow and green turtle, and a yellow bird rising like a Phoenix. 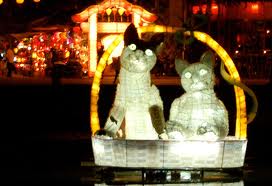 Near the bridge a performance was underway. Tourists and Vietnamese sat in a broad oval, some holding flags, while a woman and a man chanted into a microphone, occasionally stopping to affix a paddle-shaped cardboard to a line strung above the gathering, all to the pentatonic pick of a stringed instrument and the steady beat of a tom-tom-like drum.
We assumed that the profusion of lanterns and the ceremony marked a special occasion, Vietnam's independence from the French, perhaps, or defeat of the United States, or merely some less momentous national holiday. After a good pasta dinner at an Italian restaurant, we returned to the bridge, where the ceremony had ended, the hundreds who had been happily milling about were gone, and all the lanterns were out.
Before we left Hoi An the next day, we asked several residents, as best we could across the language gap, what was special about Sunday, April 24. It turned out to be nothing: the festivities we had witnessed were a regular feature at the bridge, a tourist attraction, and no less beautiful for that.
Postscript
For several weeks now, friends have urged me to stop being such a fuddy-duddy about Facebook, most recently a fan of this blog who lives in England. She thinks more people should know about these reports, even going so far as to suggest that the blog deserves to go viral. I'm not ordinarily prone to flattery, but I confess that I weakened while in Hoi An and decided to sign up, or, more accurately, have my traveling companion and technoguru do so for me. Diane made the requisite keystrokes on her MacBook Pro, only to discover that Uncle Ho, crafty shade that he is, has blocked Facebook in Vietnam.  Does Mark Zuckerberg get more respect in Cambodia, our next stop, or in Hong Kong, the one after that?
Posted by RICHARD POLLAK at 4:25 AM No comments: Links to this post