When our German friend Norbert has gazed too long on a medieval castle, or a 17th century chateau, or some highly touted Greek or Roman ruin, he is inclined to say, with a certain resignation, alte Steinen. I fear that after only one morning at Angkor Wat and its vast environs I came down with the same old-stone fatigue.
Cambodia's April heat, which approached 100 degrees by noon, didn't help; nor did the bus-hordes of tourists who clicked constantly at every sculpted Buddha and elephant, when not taking pictures of one another posed before millennium-old wall carvings on one temple after the next. In fairness, Diane pointed her camera a bit, too: 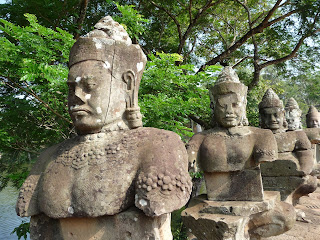 The bigger problem, I suspect, is that I'm basically an aural guy.  Five measures of Bach's St. Matthew Passion or Sondheim's "Someone in a Tree" create a spine-tingling thrill for me no alte Steinen can touch, even Suryavarman II's undeniably remarkable 12th century city at Angkor Wat.
There is also something condescending about our breathless pilgrimages to the Cambodian temples, and to alte Steinen in general. Between our photo ops, we who have given the world the Kindle and Twitter seem to be asking how on earth these primitive Khmer people could possibly have had the engineering and architectural skills more than a thousand years ago to build so magnificent and extensive an obeisance to their gods. (Readers who find my ennui misguided, if not barbaric, will find much detail about Angkor Wat and other Cambodian temple sites online, starting at Wikipedia.)
After one morning at the temples, we moved on to Angkor Artisans Arts & Crafts, a silk farm nearby. It had its aural quotient--you could hear the worms munching on mulberry leaves, the spindles gathering raw silk thread from the outside of the cocoons and fine silk thread from the inside, and the hand-operated wooden looms clacking out bolts of cloth--but the process was mostly quiet, one carried out much as it began in China some 4,000 years before the construction of Angkor Wat.
Our able guide to this ancient alchemy was Roath, who explained that the facility, the only one in the country, covered almost 20 acres and so far had taught the difficult skills of silk manufacturing to more than 1,000 young Cambodians, most of whom have returned to their villages and started small silk-making businesses of their own.
After showing us the carefully groomed field of mulberry bushes, Roath took us inside to a table on which moth couples mated within round, blue pens that resembled plastic cookie cutters. The yellow worms produced by these couplings are hand-fed the mulberry leaves, which they eat five times a day, with time off for naps. After 24 days they're sated and start to spin cocoons.


That one worm can produce more than 400 yards of silk thread struck me as a natural wonder easily as miraculous as the battle scenes, apsaras, and other bas relief that adorned the temples we had just seen. "The worms are full of protein, too," said Roath, in an extra-curricular aside. "We Cambodians fry them up and eat them with vegetables, or put them in salads."
We exited through the gift shop, a mesmerizing collection of scarves, shawls, pillows, purses, pants and dresses, a rainbow of soft reds, blues, greens and yellows. Much of this inventory had been spit out by predecessors of the worms we had just seen and created on the looms just a few steps away; it proved so seductive that I failed to resist a deep blue silk shirt, a major breakthrough in a life long committed to sartorial indifference.
Hoping to escape the searing heat one afternoon, we made a two-hour excursion on Tonle Sap Lake, which spreads on the landscape like a giant tadpole just south of Siem Reap, the town where we stayed. During the monsoon season, the lake fills to overflowing and becomes one of the largest bodies of fresh water in Southeast Asia. Now it had shrunk by four-fifths as we pushed off into its silty waters.
Our barefoot helmsman, who wore a yellow tee-shirt and black jeans, had the androgynous countenance of the young Michael Jackson and looked no more than fifteen. He steered deftly as we slid through the channel that leads to the lake, our boat, with its splintered, unpainted planks and hoary engine, a copy of the exhausted incoming vessels wheezing by on our port. The water was the color of caramel, though not so appetizing because badly polluted, a danger that only seemed to encourage the kids splashing about in the shallow depths.
We emerged into the lake at Chong Khneas, where the houses of fishing families and other structures rest on bamboo platforms that allow them to rise and fall with the level of the water. This floating village was one part subsistence fishing and two parts tourist trap, the latter featuring a bobbing souvenir and snack shop that also offered a pen full of crocodiles. Several of these scaly creatures were asleep, their toothy jaws wide open; they seemed like Wall Street high rollers who had just dozed off at their club, only not as lethal.
As we departed the tourist platform, smaller boats besieged us on all sides. Ragged women ruddered the vessels into us while their children, or someone's children, begged for "one dollar, please, one dollar." One boy of about eight, standing naked in the bow above another child no more than three, held up two fingers and pleaded for "two dollars." This was the asking price for photographing him and the large snake coiled around his neck and body.


This terrible poverty, visible in shack after collapsing shack on the right bank of the channel as we made our return, is hardly unique to Cambodia. But it is compounded, as nowhere else, by the genocide of the seventies when, in the words of one observer, "the whole nation was kidnapped and besieged from within." In a country of some 14 million at the time, an estimated 1.5 million died at the hands of the ruthless Khmer Rouge regime, while most of the world looked away.
This grim history has left no Cambodian family untouched, including Thony Khunn's. Thony and his wife, Vantha, were our hosts at Nida Villa, the comfortable two-room guest house they run in Siem Reap. In 1975, the Khmer Rouge drove him and the rest of his family out of Phnom Penh when they forced most residents of the capital into the countryside; Thony's grandparents died on the road, and one brother committed suicide rather than face punishment by his communist tormentors. (A detailed account of the family's ordeal, by Molly O'Neill, appears in The New Yorker of July 23, 2001.)
Seng Sann was our driver in and around Siem Reap, a cheerful, knowledgeable guide who informed us with great pride that we were the first customers to ride in his 2002 Toyota Camry, which had just arrived from California. Over fruit drinks at the Peace Cafe, he said that he was one of nine children and an adolescent when the Khmer Rouge came to power.  They separated him from his family, then scattered them all into the countryside. Sann survived, but a sister, her husband and a dozen members of their extended family were murdered, or worked or starved to death.
On our last night in Siem Reap, we had dinner on the second floor of Le Grand Cafe, which looked down on the teeming street life in the middle of town. As tuk-tuks jockeyed with motorbikes and the occasional automobile, and tourists squinted over their maps in the dim light, a man using his arms pulled himself along the sidewalk. His mangled legs were useless, victims of a landmine. 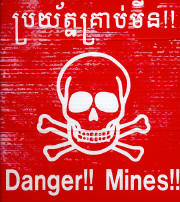 He is one of some 40,000 amputees in Cambodia, as many as a third of them children who put their feet down unwittingly, often just playing in the wrong place. The percentage of Cambodians injured this way is one of the highest in the world, if not the highest, a result of three decades of war. And more than four million landmines and other unexploded ordnance continue to booby trap the nation, especially in rural areas, where we tourists rarely tred and the Cambodian government sees little urgency.
It seems to have more passion for fighting over Preah Vihear and two other temples near Cambodia's border with Thailand.  During our stay in Siem Reap, soldiers from the two countries were killing and wounding one another over the disputed territory about 70 miles away.
Postscript
As reported in my previous post (April 28), the powers in Vietnam block Facebook, and thus frustrated my tardy and altogether innocent attempt to sign up when in that nervous communist country. Neither Cambodia nor China proved as skittish, so I'm now a member in (I hope) good standing, and am slowly working up my courage to use friend as a verb. . . . Correction: It is my good fortune to travel with a sharp-eyed copy editor, so it was no surprise that Diane noticed I had inadvertently left the h out of patriarchal in the previous post. Did I remember to correct the mistake before hitting the publish button? Alas, no.
Posted by RICHARD POLLAK at 4:18 AM No comments: Links to this post