When we arrived in Istanbul May 12, an email awaited from Diane's sister Cynthia, who is always on the lookout for a good laugh. It contained a link to a YouTube video of the late British comedians Peter Cook and Dudley Moore, the former a cop who has pulled over the latter for playing a Beethoven piano piece too fast. Cook wore a bobby's helmet and for some reason carried a trumpet, so the sketch looked funny–but there was no sound.
We had encountered this censorship before, in China and Vietnam, and I was under no illusion that Turkey was a democratic paradise. Still, the silence was ominous, a harbinger of a greater clampdown due to take effect on August 22. On that date, the government plans to require all Turkish computer users to choose among four internet filters–family, children, domestic or standard–if they wish to gain online access.
The authorities also have given internet service providers and website hosts a list of 138 keywords that are off-limits. Most seem arbitrary, if not absurd: yasak, which means forbidden, is forbidden. Also yasak are etek (skirt), baldiz (sister-in-law) and hayvan (animals). Less benign words on the list are  free and pic, which minimize the appearance of photographs and most references to freedom that might displease the Muslim-dominated Justice and Development Party (AKP), which has become increasingly authoritarian since coming to power in 2003.

On May 15, we took a tram and funicular to Istanbul's historic Taksim Square, site of a monument to modern Turkey's founder, Mustafa Kamel Ataturk, whose secular legacy the AKP works to undermine. Two ambulances stood by, as did more than a dozen policemen, some armed with automatic weapons. We assumed they were on guard because the square has long been a magnet for political protests, and also was the site of a suicide bombing last October, which the government linked to Kurdish dissidents, and which left more than thirty people wounded, half of them policemen.


But all was serene on this Sunday morning, as men (there were virtually no women) lazed on the benches or walked their dogs among the plots of flowers. We gave a rubbernecker shrug, left the scene, and took a long, leisurely stroll down the neighborhood's carfree Istiklal Street.
By late afternoon, both the square and the popular shopping promenade had filled with demonstrators, many carrying placards and shouting, "the internet is ours and will remain ours." Thousands more repeated the protest in some 30 other cities around the country, with an estimated one million weighing in on the internet.


It doubtless did not escape the AKP's notice that the large turnout was organized and coordinated over social networks like Facebook, a fact likely to harden Ankara's determination to crack down on internet freedom. Already, security officials block some 7,000 websites, according to Reporters Without Borders (RWB), which has called on the government to jettison the keyword list and lift the August 22 filtering decree.
RWB reports that references to Ataturk, "the armed forces, the Turkish nation, minorities (especially the Kurds), or so-called 'terrorist' organizations" are key targets for online censorship. So is even suggesting that the Turks of the Ottoman Empire committed genocide in killing more than a million Armenians during and just after World War I.

Treading in these and other areas that the government finds sensitive has gotten the print, radio and TV media in trouble for years. According to the Organization for Security and Cooperation in Europe (OSCE), 57 Turkish journalists are currently in prison for crossing one arbitrary line or another, more than in any other nation. In March alone, the government arrested at least a half-dozen Turkish journalists, among them Ahmet Sik, an investigative reporter jailed for allegedly accusing the Gulen Movement, an influential Muslim organization, of infiltrating the security forces.
Three weeks after Sik's incarceration, Istanbul police raided the office of his lawyer, as well as the publishing house Ithaki and the newspaper Radikal. They copied and then destroyed computer files containing the draft manuscript of The Army of Imam, the book in which Sik reportedly makes his Gulen charge. His book apparently also reveals other information embarrassing to the AKP and its conservative and charismatic prime minister, Recep Tayyip Erdogan.

Erdogan dismisses claims that he is stifling dissent, a ritual denial rolled out in part to buttress what one critic calls Turkey's "fake democracy," in part because on June 12 the nation votes in parliamentary elections and he needs a majority of AKP seats to stay in power, and in part because the European Union, into which Turkey has long sought entrance, frowns on media censorship.

The facts behind Erdogan's not-us noises are these: Turkish authorities can imprison journalists for up to three years before trial, one journalist has received a sentence of 166 years, and the longest sentence sought by prosecutors is 3,000 years. These and many other draconian measures have cowed most Turkish media into a self-censoring servility, not least because many convicted reporters and editors wind up in high-security prisons alongside hardened criminals. (The Istanbul International Independent Media Forum offers further details on Turkey's media repression here.)

These journalists are in prison for doing pretty much what I'm doing here, and have done with impunity all my professional life: reporting what seems to be news, or at least interesting, and occasionally setting down opinions, sometimes strong ones. When I imagined what punishing conditions these Turks face for just doing their jobs, indulging in tourism required a willful suspension of belief. So, as we so often do, I stashed my moral compass where I couldn't see the needle swing toward Complacency, and ventured into the many attractions of Istanbul.

Bins spilled over with tea after tea: apple, love, green, rose, jasmine, ginseng, stomach, pomegranate. Tall wheels of white nougat stood guard next to similar towers melded of honey, pomegranate and pistachio, often flanked by wall after brick wall of Turkish Delight. A sign read: Turkish Viagra. "It's just walnut and figs," explained the vendor, laughing at my query. "We do it for the tourists."


Despite my listless attitude toward old stones (see May 6 post), I found the glazed tiles of the 400-year-old Blue Mosque exquisite in their delicate design, and a welcome relief from the architecture of so many hulking Christian churches and cathedrals, with their overwhelming bell towers, massive naves, intimidating high altars and all those flying buttresses and fearsome gorgons looking down.

The stained-glass windows that illuminated the huge dome matched the tiles in beauty, though 260 seemed more than necessary to do the job. And six minarets seemed like two too many for one mosque, no matter how important Sultan Ahmet, who ordered its construction and is buried within. But, then, Excess and Religion have been tight for at least two millennia.

For part of the week we were in Istanbul, I was laid low with a sinus infection. Diane carried on, however, and reports that the Topkapi Palace's 86-carat Spoonmaker's Diamond, nestled on a cushion of wine-colored velvet and framed by 49 other diamonds, was a sight worth waiting in a long line of rambunctious school kids to see. She forbore from reminding me that I didn't give her an engagement ring when I proposed. 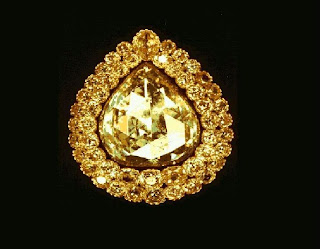 She said that the Basilica Cistern, complete with spooky music and moody golden lighting, was another hit, as was the Grand Bazaar, a huge covered market that has been open for business since before Columbus took his Atlantic voyage. But the highlight of her solo wanderings was the Hagia Sophia, completed in 537, which served as a church for 916 years and a mosque for 481 years, and is now a museum, which gave her a rare ecumenical chance to admire Christian mosaics and Islamic tiles and calligraphy side by side.

By mid-week, I had recovered sufficiently to join Diane on the ferry to Burgazada, one of the nine Princes Islands, so-called because the meanies in Byzantine times exiled princes and other royals there. That can't have been much fun, but the day-trippers who packed our boat seemed to be having a fine time, perhaps because they knew something we didn't about Buyukada, the largest island, to which most were bound.

We were happy with Burgazada, which like the other islands tolerates no cars. To get around you cycle, hire one of the pony-drawn carriages, or walk, as we did. The narrow streets were largely deserted, as were the houses on either side, homes and apartments populated mostly by summer vacationers or weekenders. We had lunch hard by the water, looking out at a blue sailboat bobbing in the cove, and beyond it to the sun-drenched Sea of Marmara.

By the end of our stay, I had become a slave to stuffed eggplant, which, indulging my usual lack of culinary imagination, I ordered at four different restaurants.  The best–a warm, succulent pod filled with ground lamb and resting on a bed of garlicky yogurt, came at Ciya, a restaurant on the Asian side of Istanbul that may be the best in the city. The founder, Dagdeviren Moses, has created a dining mosaic based on his extensive research into the foods of Anatolia, Mesopotamia and several other ethnic cuisines from inside and outside Turkey's borders. These you choose not from a menu but by leaning over large kettles of kebabs, stews, soups and the myriad other dishes on offer and consulting with the chef himself.

Sated, we caught the ferry back across the Bosphorus. A giant golden-red disk backlit a dozen minarets as it set; a full moon rose above our stern. When will Ahmet Sik and his incarcerated comrades gaze upon such a scene again?

Posted by RICHARD POLLAK at 7:10 AM 3 comments: Links to this post