A longtime friend in New York has gently rebuked me for not mentioning, in my previous post from Austria, the nation's long history of anti-Semitism and its collaboration with the Nazis. "Austria, as you know, embraced the Holocaust enthusiastically," she wrote in an email, "and if one doesn't experience anti-Semitism in Austria today that's probably because there are hardly any Jews there."

She is right about the numbers. Before the Anschluss, in 1938, some 192,000 Jews lived in the country; most of them resided in Vienna, where they constituted 9 percent of the city's population and famously flourished in the professions, the arts and many businesses. By the end of 1939, emigration and the Nazi killing machine had left only 57,000 Jews in the country; today the total is about 9,000, in a nation of 8.2 million people.


I did not touch on this criminal history in my post (June 17), because what happened here almost 75 years ago was well off the point, which was that the successful social democratic policies of contemporary Austria should be an object lesson for the United States. Nonetheless, as my friend correctly suggests, the country's dark past shouldn't be ignored.

For decades, most Austrians refused to confront this history, insisting that their homeland was a helpless victim of the Nazis rather than an eager participant in their murderous anti-Semitism. Unlike Germany, which ultimately worked hard to make its citizens face the truth about Auschwitz and the Third Reich, Austria chose to avert its gaze.

It is hazardous to draw conclusions after a visit to Vienna of only a month, but signs suggest that in the last decade or so, the country slowly has begun to deal with its willing complicity. One is the bronze plaque at the entrance of Grosse Stadtgutgasse 34, where Diane has been practicing in the apartment of Leonore Aumaier, a generous fellow pianist who teaches at the Universitat fur Musik.

The building is in Leopoldstadt, the neighborhood adjacent to the Prater where many Viennese Jews lived in the thirties. In 2007, Leonore and other residents established a project memorializing the Jews who had been ripped from their apartments in 1938, at least 17 of whom died at the hands of the Nazis or their Austrian sympathizers. Those names appear on the plaque (below), and the families' histories are recounted, along with other information, at the project's moving website.

Also in 2007, Vienna officials came to New York to promote their city and to establish a "twinning" relationship between Leopoldstadt and Brooklyn. This linkage between the decimated Jewish district and the heavily Jewish borough had its public relations quotient, but the hope in both communities that it might help heal past wounds and lead to rapprochement was doubtless sincere.

More substantive is the Austrian Holocaust Memorial Service, which is based on the German program, Action for Reconciliation. Founded in the early nineties as an alternative to military service, AHMS has since sent some 400 Austrians, most of them in their twenties, to work worldwide with such organizations as the Simon Wiesenthal Center in Los Angeles and the Amicale de Mauthausen in Paris. (Many schools in Austria require their pupils to visit the preserved Mauthausen concentration camp, 15 miles southeast of Linz, where thousands of Jews were worked or tortured to death.)

Shortly after AHMS's founding, the Austrian chancellor at the time, Franz Vranitzky, told a Jerusalem audience that the program's intent was to recognize Austria's role in the collective responsibility for the Holocaust and to ensure that such genocide would "never again" occur.

The sculpture of a bearded old man scrubbing the street, which the Nazis forced many Jews to do during the Anschluss, magnifies Vranitzky's words like a scream.  It is part of a Monument Against War and Facism by the late Austrian artist Alfred Hrdlicka that also features a split sculpture, using granite from Mauthausen, that depicts chained slave laborers and a dying woman giving birth to a soldier.


This cenotaph makes its furious statement where it can hardly be missed by the Viennese and tourists alike: between the Hotel Sacher and the Albertina Museum, and just behind the Staatsoper. From the outset, the Nazi-hunter Simon Wiesenthal and others felt the portrayal of the kneeling Jew, with his scrub brush and corset of barbed wire, was both unsympathetic and disrespectful.

This criticism led eventually to the creation of a memorial in the Judenplatz dedicated specifically to the Holocaust. Designed by the British sculptor Rachel Whiteread, it sits in the cobblestone square in willfully mundane, if not ugly, contrast to the surrounding elegant buildings. It is a nameless library, all access denied, to symbolize "the people of the book" whose lives and knowledge were lost in the Holocaust. Around the base are the names of the 41 concentration camps where Viennese died. 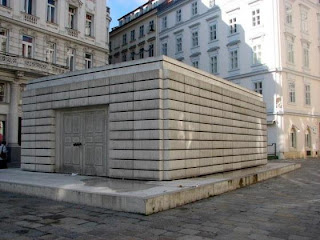 These and other relatively recent efforts to stress Austria's complicity in the Holocaust and to commemorate its victims are worthy, but they are almost polite compared to the flakturms, the six unintended monuments to the Nazi years that loom like evil castles in the city. Two are in the Augarten, the flower-filled Leopoldstadt park where Mozart once performed in the palace that now houses the Vienna Boys Choir. Hitler ordered these massive towers erected to protect Berlin, Hamburg and Vienna from Allied bombing raids with anti-aircraft fire from guns mounted at their tops; the bunkers also could shelter several thousand soldiers and civilians.

The walls of these reinforced concrete bastions are up to eleven feet thick, which made them impervious to even direct bomb hits but also, now, to dismantling. Any explosives strong enough to bring down the structures would also damage or destroy much of the Augarten and many of the surrounding buildings. This leaves the flakturms as possibly the only legacy of The Thousand Year Reich that might last that long.

The memories of Nazism, the Anschluss and Austrian anti-Semitism are inescapable in the shadow of these indestructible obscenities. In truth, though, prejudice against Jews has waned considerably here in recent years: yes, because of their absence, but also because of education and the passage of time.

Unfortunately, it has been replaced by a growing hatred of Muslims and other immigrants by Austria's influential right wing, which sees these dark-skinned newcomers as threats to the economy and, not incidentally, to white, Christian purity, views of aliens shared by millions in the United States and elsewhere. As always, the anti-Other virus has no trouble finding a host.

Posted by RICHARD POLLAK at 10:04 AM No comments: Links to this post