From Melk to Krems Through Days of Yore

European bike route No. 6 runs from Saint Nazair, on France’s Atlantic coast, to Constanta, a Romanian town on the Black Sea. Mostly it hugs the Loire, the Rhine and the Danube rivers, so there probably aren’t too many hills. At 40 miles a day, I estimated that it would take only a couple of months to cover the 2,270 miles.

When Diane suggested that something a bit less ambitious might provide a sufficient workout, I was duly wounded, especially since I had just bought a new yellow jersey to herald my advance. Nevertheless, doting husband that I am, I relented, opting instead for the stretch of No. 6 that follows the Danube from Passau, at the German-Austrian border, to Vienna, a mere 204 miles. Then I remembered that, alas, I had no panniers.

I settled for a day trip. This involved not one but two trains for the hour-long ride to my starting point, the town of Melk, in Austria’s Wachau Valley. Both trains offered commodious spaces for bikes, of which mine–a sturdy orange and silver job rented from the hotel where we were staying–was the only one on this Wednesday morning.

At the St. Poelten station, spotless elevators that were not kaput dropped smartly from Platform 6 and rose to platform 5, a convenience not widely available on the New York City subway or its suburban sisters, Metro North and the Long Island Railroad, whether you’re traveling with a bike or not.

Train two pulled into Melk on the dot at 11:03. The great Benedictine monastery looked down on the station with a baroque welcome that startled me with its size. I had heard of the remarkable frescoes by Johann Michael Rottmyar and the library rich with medieval manuscripts, but made instead for a delicatessen, where I bought a tomato and mozzarella sandwich and bottle of water, which joined the crisp apple already in my backpack.

A Donauradweg runs along both sides of the river: Donau for Danube, rad for wheel, weg for way. I rolled out of town with the waterway on my left, following it down stream. A sign advised that my destination, Krems, the town where we were staying, was only 24 miles away. This was a blow; I had been told the distance was more than 30 miles.

Moreover, the green signs marking the route all included an insignia–a blue square with a white 6 in the middle surrounded by twelve yellow stars–reminding me that when I reached Krems I will have traveled just .01 percent of the route I had so confidently contemplated until Diane looked dubious. This depressing realization was soon ameliorated by measuring my progress in kilometers, which served nicely to make the day's outing seem, at 50K, a good deal longer, though when I newly computed the percentage it remained intractably the same.

After only a few spins, I reached the small market town of Schoenbuehel and its castle of the same name, an imposing pile originally built in the 12th century but renovated several times. It sits high on a crag above the river, its forbidding stones looking as if they made many an approaching stranger wary of boiling oil and other discouragements.

The day was sun-drenched and not too hot, yet often I pedaled for ten or fifteen minutes without encountering another cyclists. Birds were my main company, their chirping chorus cheering me on as I moved through the valley, its famous vineyards and apricot orchards tantalizing on my flanks. 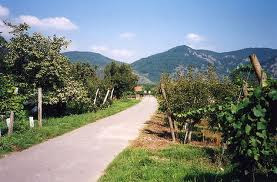 The storied river rippled along, like wheat waving in a broad meadow as we moved east in tandem. There was little traffic on the water as well: the occasional rusty barge straining upstream, a kayak or two, and periodically a long white tour boat, her guide’s amplified insights echoing ashore, impenetrable whatever the tongue.

After a leisurely10K, I came upon the Kuenringer ruin at Aggstein, regarded by many as the most interesting of the several castles in the valley. Like most such redoubts, it had been besieged and rebesieged, conquered and reconquered, and several times rebuilt, in what my childhood reading always called the days of yore.

Among its residents was one Scheck von Wald, who became the first of several robber landlords who looted boats plying the river in the 15th century. I was curious to see where these bad guys hung out, but the castle sat on a mass of rock almost 1,000 feet above the town, doubtless a fine lookout for river pirates but a climb that struck me as not particularly energy efficient, whatever discoveries awaited.


After about 45 more minutes, I began to case the many shaded benches placed strategically along the smooth macadam radweg.  I looked forward to eating my backpack picnic while gazing at the majestic river and its sylvan banks. Perhaps something in the middle distance would explain how such a powerfully green, bucolic scene became the saccharine blue of Johann Strauss's drawing room waltz.

Unfortunately, lunch and nature called simultaneously. Reluctantly, I gave up the bench quest and found my way to the Gasthau zur Wachau, a tidy inn with yellow walls just up from the river. In an unspoken agreement, the proprietor pointed to the door marked Herren, where I tidied up; I then spent 12 euros on a grosse gemischter salat, a collage of thinly sliced cucumbers, shredded carrots and cabbage, lettuce, tomatoes and the potato salad that Austrians and Germans make so tasty by wisely eschewing mayonnaise.

This Michael Pollan-approved meal arrived on a plate the size of a Frisbee; I devoured it all, sopping up the vinegary dressing with two crusty rolls as I sat beneath a red umbrella on the hostelry’s wide terrace, which looked onto a lush garden. Once back on the path, I did pause at a bench, unwrapped the now somewhat soggy sandwich and ate all the mozzarella.

We come now to Richard the Lionheart, my namesake, or so my father liked to maintain when I smacked a home run while he stood by the Ray Elementary schoolyard fence in Chicago. I knew even back then that the Richard was less interested in hitting pillowy Windy City softballs than in sallying forth on crusades, but only now discovered that, in the late 12th century, he had been imprisoned in Duernstein castle just across the river from where I had paused for a breather.


Richard was locked up for offending Duke Leopold V of Austria during the Third Crusade, apparently by casting down the duke’s standard from the walls at the Battle of Acre. This scenario, I imagined, was something like getting thrown out of the game for kicking dirt on the umpire’s shoes.

I could have crossed the river here, which would have put me on the right side for my last lap, but the ferry that shuttles back and forth left just as I pulled up near its dock. The ruin of the medieval castle where Richard had languished was hard to discern high on its hill, but Duernstein's most famous landmark, the blue-and-white steeple of the former Augustine abbey, rose on the opposite bank like a giant Wedgwood chess queen. 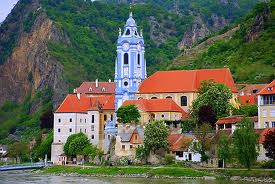 After another half-hour, I reached the bridge at Mautern and crossed the Danube into Krems, an historic town just upriver from Vienna. I bumped through the cobbled streets, parked the bike at our hotel, went up and took a long shower and a longer nap, perchance to dream of wearing my yellow jersey in cycling's biggest test, just about to begin in France. I didn't.

By now, I’m sure some readers are wondering why, if I really hankered to do all 2,270 miles–or even all 3,653 kilometers–of No. 6, I took the trains to Melk in the morning instead biking there, thus at least doubling my distance for the day. Well, please don’t think it had anything to do with stamina. I just happen to love European trains. In fact, I wrote much of this post on a sleek intercity express heading lickety-split to Berlin.
Posted by RICHARD POLLAK at 12:35 PM No comments: Links to this post