In 2009, during the Broadway run of 33 Variations, Moises Kaufman's play about Beethoven’s obsession with his “Diabelli Variations,” Dr. Michael Ladenburger, director of the composer’s archive in Bonn and the model for a character in the play, came backstage one evening to greet the cast. When it became clear that our travels this year would bring us to Bonn to see friends, Diane, who played the variations throughout the New York and other productions, made a date to visit the archive, on July 18. Her report follows:
Beethoven-Haus, where the composer was born in the attic in 1770, is a typically baroque yellow structure at Bonngasse 20, in the center of the city; the building and the one next door form a commemorative museum dedicated to the composer’s life and works.  Since I was a child and played “Für Elise,” I have performed many of Beethoven’s works, from the bagatelles and sonatas to his Fourth Concerto and the “Diabelli.” I feel as if I am entering a chapel.
Michael himself greets me. He is soft-spoken and bookish, and after a warm welcome he turns me over to a colleague.  In a room full of computers, she explains that the online archive here, unlike on your screen at home, offers audio music clips that are full-length rather than short samples, and high-definition close-ups of Beethoven’s original manuscripts.


At our next stop, the library, another staff member brings out several facsimile editions, including a newly-published “Diabelli Variations” in a handsome, two-volume boxed set.  After studying them for a while, I am escorted downstairs into a small movie theater with no seats to see Fidelio 21st Century, a 20-minute interactive 3D presentation of five scenes from Beethoven’s only opera.
The characters Florestan, Leonore, Rocco and Don Pizarro are represented by moving particles outlining abstract shapes–a spiral, a blue wall, a red ball and white bars.  Controls allow viewers to move the shapes around to the music, performed by four singers and the Vienna Philharmonic under Leonard Bernstein. I find this a bit jejune, but am nonetheless touched, especially when Leonore and Florestan’s shapes become intertwined at the end and cannot be separated, as the lovers sing “O namenlose Freude” (“Oh, nameless joy”).

Michael reappears at this point and takes me downstairs to the chamber music hall, which opened in 1989. It is a gem, a steeply raked, wood-paneled amphitheater with a 9-foot Steinway concert grand at the center begging to be played. Michael says, Go ahead. I play some Beethoven, Chopin and Schubert, after which he confesses that, though Beethoven is his scholarly passion, his favorite composer is Schubert. He also tantalizes me by revealing that I had been playing right above the vault that holds the original Beethoven manuscripts.
At lunch, he explains that he tells most scholars to use the online images for research. The original pages were side-lit when scanned, so that many details on the paper–false starts, erasures, faint pencil marks, ink blots– are, when magnified on the screen, much more easily discerned and interpreted. This was certainly the case when I viewed the “Diabelli” originals in the computer room, but I try to hide my disappointment as I fear there will be no visit to the inner sanctum.
At 3 P.M., my friend Nicola calls my cell phone to say that, as arranged, she will be by in fifteen minutes to drive me to an apartment where I can practice for a couple of hours. When Michael hears “fifteen minutes” he looks dismayed.  “I didn’t know you had an appointment,” he says, as if I had just slammed down the key cover in the middle of the “Appassionata.”
“I was just going to practice,” I say, and quickly call back Nicola to cancel. As soon as I hang up, I find that we are standing directly outside the thick, black steel door of the vault. “Put your jacket on, it’s cool inside,” Michael says. He unlocks the door and we step inside. He gestures at one shelf and says “There is the ‘Moonlight Sonata,’ there is Op. 111, and the Missa Solemnis . . . .”
The first thing he brings to me is the “Diabelli Variations” autograph, encased in a royal-blue velvet binding, the pages inside darkened with age. It is a jewel of the collection, purchased from its longtime private owner only two years ago, after an intense five-year fund-raising effort that featured many benefit concerts by leading musicians. The Beethoven-Haus website calls the acquisition "the most important addition within the last 99 years." Michael discreetly does not reveal who had owned it, or the purchase price.
Having looked at the digital version only a couple of hours before, many of the images are already familiar: the changes in spacing, from airy and wide open (Var. 20) to crowded and spidery (Var. 27); a blot where Beethoven overturned his ink bottle onto the page; the furious crossings-out in what was supposed to be a fair copy. Beethoven had begun to use it as a sketchbook towards the end, then realized what he was writing in.
Out comes the Wittgenstein Sketchbook, which contains Beethoven’s first drafts of the “Diabelli” and the Missa Solemnis, which he was working on simultaneously in the 1820’s. The mottled red cardboard cover is also familiar; I’ve seen the sketchbook stage prop fought over night after night by the actors playing Anton Diabelli and Anton Schindler, Beethoven’s secretary.
Michael is reverential as he shows me more of the vault’s many treasures: Beethoven's massive wooden desk; a small oil painting of his hands, done at his deathbed by Josef Danhauser; an engraving of the composer that Beethoven particularly liked and autographed to a friend; a card with a lock of his auburn hair.
I ask to see Op. 111 since I’m studying it now. Michael takes out the autograph of the first movement and allows me to read through the piece as he gingerly turns the pages by lifting each one with a small note card. I listen to the music in my head as I follow this score, imagining Beethoven setting down these miraculous notes. The handwriting is vigorous throughout, evincing his determination to finish this final sonata as he struggled against illness and despair.
After Michael points me towards the permanent and special exhibits upstairs in the museum, which include pianos and string instruments owned by Beethoven, I assume the tour is finished. It has lasted over six hours, more than I ever expected, and I am enormously grateful. As I begin saying goodbye and my thanks, Michael surprises me.


He asks if I would like to play a 1824 fortepiano, from the period of the “Diabelli” and four Schubert sonatas I had recently recorded. He takes me to a small recital hall with two dovetailed fortepianos behind a velvet rope. He removes the rope and the signs saying “Do Not Touch,” then opens the lid of the Graf piano. I play portions of Schubert’s Sonatas in A-minor and B-flat, his Impromptu in G-flat, Beethoven’s Op. 78 and “Diabelli” theme, and Mozart’s Turkish Rondo. The piano is in superb condition inside and out, a 187-year-old wonder with a rich tone ranging from robust to subtle.
I had never played an instrument with five foot pedals, instead of the three I am used to.  From the front row Michael kibitzes gently, suggesting I experiment with the different colors the pedals produce: here a reedy bassoon effect for the bass line, there a drum and cymbal effect for the Turkish march. A few people wander in to listen as I revel in this unexpected bonus. O namenlose Freude!
Posted by RICHARD POLLAK at 4:23 AM No comments: Links to this post

Finding Friends in the Tiergarten

On our final day in Berlin, during a cycle in the Tiergarten, we came upon a placid gold fish pond that stretched away from our path toward a white marble monument shining in the bright morning sun. As we approached, Diane said, “That looks like Mozart and Haydn.” Her eye proved as good as her ear; moreover, Beethoven was on the other side.
There is much more impressive statuary in Berlin than this memorial to the three German musical geniuses. The Greek and Roman sculptures in the Pergamon Museum alone are far superior. The 33-foot-high tribute has even been dismissed as a “three-man furnace,” for its resemblance to the room-high, richly decorated tiled stoves that heated many Berlin homes around 1904, the year the memorial was erected.
None of this mattered. Here was a monument paying homage to not one but three of the giants, before whose gleaming half-figures we stood in gratitude and awe, recalling the strains of their music as from a bottomless spring.
Both the pond and the small meadow on the other side of the memorial lay in silence, as if the small audience lazing on the grass or sitting on nearby benches was waiting patiently for a concert to begin: the overture to The Marriage of Figaro, maybe, followed by the “Drumroll” and, fittingly, the “Pastoral.” 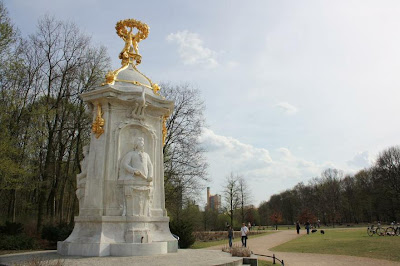 By the end of World War II, the Tiergarten was a wasteland, the memorial shattered. Several parts were missing, including masks, musical instruments and flower pendants that had adorned the marble work. Mozart’s nose, too, had disappeared. Repairs were made at the time, but they were inadequate and the statue further deteriorated over the years.
The decision to build a railroad tunnel beneath the Tiergarten in the nineties finally rescued the monument. Because of the construction, it was dismantled; when the tunnel was finished and the monument grounds restored, a complete renovation went forward.
Using historical photographs and postcards, craftsmen slowly reconstructed the many missing pieces, then carefully cleaned the marble and gave it a graffiti-proof coating. But they purposely took care not to hide the bullet holes that pock Haydn and other parts of the memorial, lasting evidence of the Battle of Berlin that ended the war 66 years ago.
Beethoven, Mozart and Haydn gave the world more than 1,200 works, dozens upon dozens of them masterpieces. I tried to imagine their astonishment had they been present a few weeks back at a party in Vienna where the host gave Diane a flash drive that contained Mozart’s entire catalogue, plus all 104 Haydn symphonies.
As if on cue, “Ode to Joy” rang out on a carillon somewhere beyond the trees. The exuberant bells left me wishing I could assure Beethoven that there was, incredibly, plenty of room left on the pinky-length memory stick for the Ninth Symphony, and the rest of his oeuvre as well.
Posted by RICHARD POLLAK at 6:28 AM No comments: Links to this post