We have been staying in London with Hugh and Julie Sandeman, British friends we hadn’t seen in several years. Hugh was a correspondent and editor at The Economist when we first met in Brooklyn, but long ago stopped looking through the glass at businessmen and became a successful one himself. Julie . . .
Where to begin? She was a stockbroker in those Brooklyn days, but gave it up to concentrate on raising their three sons. Jun, Michi and Tomo are now engaging and productive young men, leaving Julie time to indulge her passions for The Guardian quick crossword, tennis and bridge, and to pull off such culinary wizardry on her seven-burner stove that Hugh is in constant danger of not getting the equal billing he deserves as a magnanimous host.
Which brings us to Glyndebourne, a festival that famously features not only sterling opera performances but picnics of such a high order that only the best bred ants dare invade the white and green tablecloths. By 10 A.M. on August 10th, the day we drove down into the East Sussex countryside to see Handel’s Rinaldo, Julie had turned out a salmon roulade, with less effort than I expended on buttering my toast.
We arrived at Glyndebourne by 3 P.M., our party including another friend of the Sandemans, John Graney, a doctor from New York, and his friend, Nicole Saïd, the director of a French ballet company. Dozens of picnickers already dotted the grounds as we set up our table next to the walled trench that keeps animals from wandering onto the festival’s manicured lawns. This indentation, called a ha-ha for reasons no one at table could explain, leaves the view unhindered, in this case of pastures where woolly occupants idled as “Sheep May Safely Graze” played in my head. 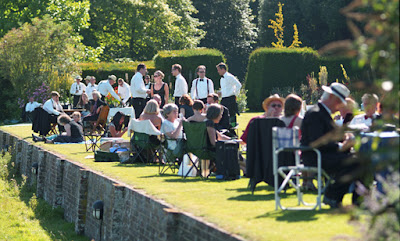 Tradition at the 77-year-old festival dictates that women don their finery and men wear dinner jackets. Hugh and John complied, and looked properly smart, as did several hundred other black-tie opera goers strolling across the croquet lawn, through the flower gardens, and among the topiaries and tall yew trees. I yearned for my own monkey suit, which I wore to my high school prom in 1948 and, mirabile dictu, still fits. But when I packed for our journey last January it seemed altogether expendable.
I made do with navy blue slacks, a blue linen sports jacket, blue button-down shirt, an Indian silk bow tie handmade by Diane, and, I fear, sandals.  My spiffed up companions kindly assured me this was a respectable outfit; still, I felt a bit as if I were singing in a chorus and had forgotten my robe.


Fortunately, other sartorial dissidents soon put me at ease, among them two men in Mao jackets, two others in tartan kilts, and a tall chap in a black cutaway, white tie, and gray trousers draped around off-white spats. Nearby a suave Spanish visitor kept fixing his profile as if he were Valentino. A white scarf with blue polka dots the size of silver dollars encircled his neck; his chest hairs bristled in the V of his open-necked white shirt; his blue suit was set off by brown shoes, which made me feel much better about my sandals.
As a chilly wind whipped our tablecloth, Hugh broke open a bottle of champagne, filled the flutes Julie had carefully packed and I silently toasted whatever god manages the weather, in hope that he or she would fend off the threatening rain clouds that had begun to gather. I was quickly distracted by Julie’s salmon roll and a bowlful of ham and cheese tartlets she also had prepared for our pre-curtain sustenance.
These bite-size treats led to a reprise of the previous evening’s etymological struggle over the word tartle, the definition of which we could not find anywhere in the Sandemans’ well-stocked shelf of reference books. Google eventually came to our rescue, confirming a recent letter in the Times Literary Supplement from our friend Sir Sydney Kentridge speculating that tartle means being unable to recall the name of someone you're trying to introduce, as in: “I tartled when I couldn't remember what’s-his-name, the composer of Rinaldo.”
After three bars of the overture, you knew he was Handel.  Rinaldo is his first opera, which debuted in London on February 24, 1711, the day after his 26th birthday. The libretto, by one Giocomo Rossi, involves lovers, thwarted lovers, imprisoned lovers, freed lovers, furious lovers, I-hated-you-but-now-I-love-you lovers and, inevitably, reunited lovers–plus Saracens, battles and an exceptionally sexy sorceress in black latex.

This scenario, a major contender in any Silly Opera Plot contest, was rescued to a degree by the director, Robert Carsen, whose conceit makes Rinaldo a bullied British schoolboy whose revenge fantasies take him, complete with breastplate, back to the First Crusade at the end of the 11th century, where the opera was originally set.

Despite this time travel, it was British teenagers who did the warring, using lacrosse sticks (ladettes) and hockey sticks (lads) as weapons when they were not scrimmaging fiercely over a soccer ball or riding bicycles. These I presumed were supposed to represent earthbound steeds, until at the end of the first act Rinaldo pedaled high above the stage. Pegasus? E.T.?
No matter. It was the music that counted, played with brio by the Orchestra of the Age of Enlightenment, conducted by Ottavio Dantone, whose hands were as deft on the harpsichord as they were in leading his players and the cast. Nowhere was the Handelian interaction more thrilling than when Brenda Rae, the wicked sorceress Armida, loosed her furioso coloratura in “Vo far Guerra” (“I will make war”) as Dantone’s fingers flew over his keyboard.
Julie served dinner between acts two and three, an interval the festival conveniently stretched to 85 minutes. The temperature had dropped and rain still threatened, so John and Hugh brought table, chairs and food from the ha-ha and set up on the covered terrace of the auditorium–six place settings with china, silverware and cloth napkins.
More champagne flowed, followed by a homemade parade that began with a vegetable terrine and a lettuce salad and continued with bowls of beets and butternut squash in a red onion vinaigrette, marinated eggplant, peppers and zucchini, and new potatoes and quail eggs coated with pesto. Meringues followed, bestrewn with fresh blueberries, strawberries and raspberries and dolloped with crème fraiche.
There was coffee, too, but I didn’t need this stimulant to keep me awake through the final act, which ended with a triumphant Rinaldo back in his classroom, alone and looking as satisfied as I felt.

Postscript
Did I deserve to be satisfied–did any of us–given the rioting, looting and arson that had pocked  London and other British cities in the days just before we indulged in high art and fine cuisine?  Yes, because the Glyndebourne experience was magical from start to finish, and I wouldn't have missed it unless doing so would have prevented the explosion. No, because neither I nor anyone else in the well-fed, stylish audience does nearly enough when we're not listening to Handel's sublime measures to end the inequities that helped cause the rioting, and that afflict not just Great Britain but every corner of the globe.
Posted by RICHARD POLLAK at 4:09 PM 1 comment: Links to this post