We landed at JFK on August 16, after seven months and twelve days on the road through ten countries: China, Singapore, Vietnam, Cambodia, Turkey, Italy, Austria, Germany, France and England. Our journey put us on nine airplanes, eight intercity trains, countless buses, trams and subway cars, and one excursion up the Rhine. We slept in 28 different beds and dined out at least 400 times.

It is good to be home, even though we are not, quite. The couple who sublet the Manhattan apartment where we have lived for three decades is staying on a bit longer. That has given us the opportunity to explore yet another foreign land, Brooklyn. We've rented temporary quarters there, a third-floor walkup whose flights are ameliorated somewhat by the apartment's proximity to Rex, 7, and Agnes, 5.

These grandchildren, like most grandchildren their ages, are seven feet tall and already skilled at differential calculus, so I will do my best in coming weeks not to dwell on either them or their remarkable parents, one of whom is my daughter. Instead, I plan to . . . well, I'm not sure. For now, following are a few of the many photographs Diane took (save for the first one) on our travels. [Alert for email subscribers: please go directly to blog link for best photo display.]


The dog at center is Tulea. In 2009, on Broadway, she took an unscripted curtain call at the end of 33 Variations, the play that moved us to begin our Wanderjahr when it was revived in Los Angeles, in January 2011. Tulea managed to stay behind the scenes during the L.A. production, until posing for this shot backstage on closing night, March 6. Her colleagues are, from left, Zach Grenier (Beethoven), Susan Kellermann (Gertie Ladenberger), Jane Fonda (Dr. Katherine Brandt and Tulea's mistress), Don Amendolia (Anton Diabelli and Tulea's temporary handler), Greg Keller (Mike Clark), Diane (music director and pianist), Samantha Mathis (Clara Brandt), and Grant James Varjas (Anton Schindler). Photo: David Lober 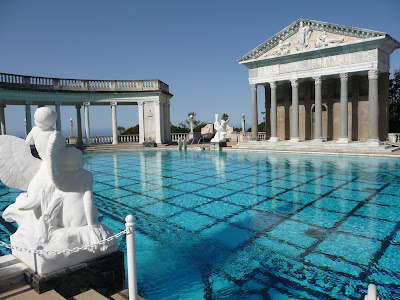 After 33 Variations closed, we spent two-plus weeks exploring central California, from Santa Barbara to the Monterey Peninsula. This modest pool is, not surprisingly, a prominent feature of the William Randolph Hearst Castle at San Simeon. In 1924, the Chief, as he was known to his employees, told his architect, Julia Morgan, that "Mrs. Hearst and the children are extremely anxious to have a swimming pool!" 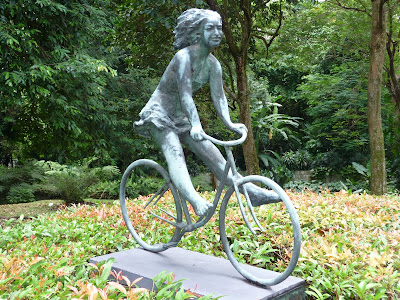 On April 5, we flew to Singapore for a reunion with our friends Tina and Jeremy Nixon. They took us, along with their daughter Natasha and Labrador puppy Holly, on a tour of the city-state's lush botanical garden, where I signed up this carefree girl as my cycling muse for the rest of our trip. 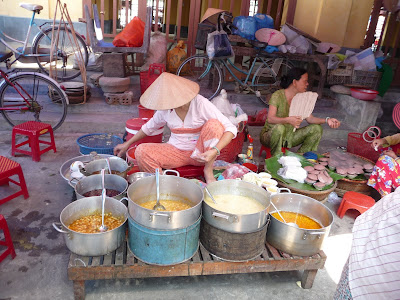 The rice, beans, fish, soup and other items at this Vietnamese market in the coastal resort of Hoi An all looked and smelled tantalizing, but Diane already had had an intestinal disagreement with street food in Ho Chi Minh City, so we passed. 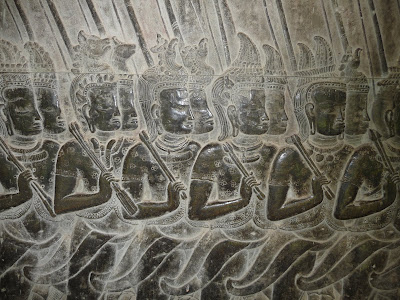 Temperatures pushing 100 degrees at Angkor Wat made it hard to concentrate on these determined warriors, even though Charles Higham, the British archeologist and expert on the 12th century temples, has called bas-relief friezes like this one "the greatest known linear arrangement of stone carving." 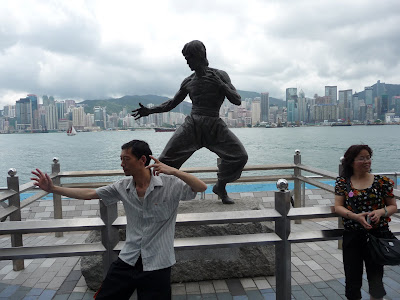 Bruce Lee and an enthusiastic would-be challenge all comers. The bronze statue of the martial arts movie idol, who died at 32 in 1973, attracts thousands of visitors daily as they stroll along Hong Kong's Avenue of the Stars. 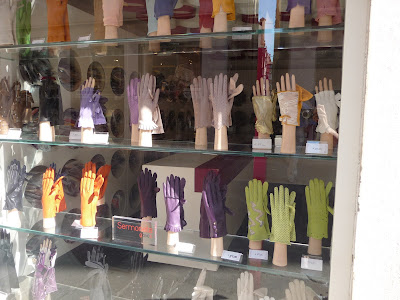 Gloves are almost as ubiquitous in Venice as gondolas and the pigeons in Piazza San Marco. We looked, but did not buy. 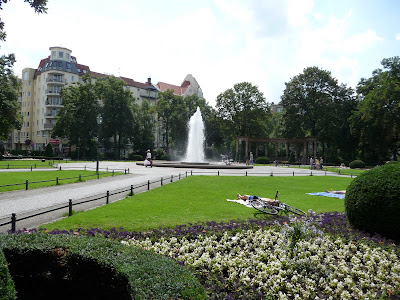 Viktoria-Luise-Platz in the Schoeneberg district of Berlin, a few steps from our hotel. The square, laid out in 1900, was a calm respite at the end of a long day of sightseeing, and also the site of wrestling matches between friendly canines. 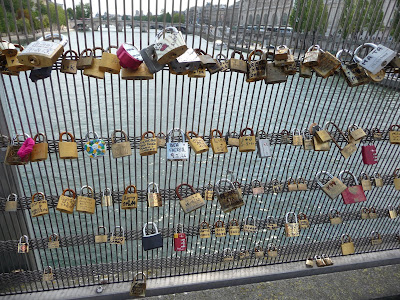 In recent months, couples from all over the globe have secured their love by initialing padlocks, attaching them to bridges over the Seine, and throwing the keys into the river. This moved me to hum "I Love Paris" while waiting for the Tour de France finishers to sprint by on July 24. 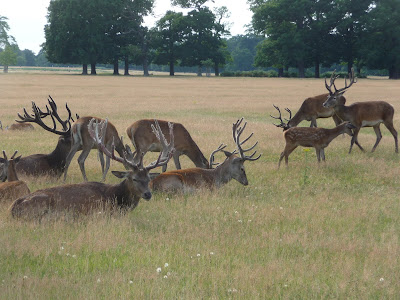 London's Richmond Park, more than three times the size of Central Park, was established in 1625 by Charles I as a refuge for red and fallow deer. I biked for almost two hours one day without seeing any of the more than 600 that still roam among the trees and in the meadows. Then, there they were.
Posted by RICHARD POLLAK at 9:51 PM 1 comment: Links to this post