No Longer Just for "Charlatans and Ninnies"

In my previous post (June 14), I called attention to the first of two generous articles about my memoir,  After the Barn. They were written by Michael Miner, one of Chicago's leading journalists and a mainstay at that city's weekly Reader since 1979. Following is his second column.

RICHARD POLLAK EXPLAINS HOW HE SELF-PUBLISHED HIS NEW BOOK

In 2009 Richard Pollak finished writing After the Barn, the family memoir he'd begun some 20 years earlier. Twice he set the project aside to write—and publish—other books: The Creation of Dr. B, a biography of Bruno Bettelheim; and The Colombo Bay, an account of life on a container ship as it sailed from Hong Kong to New York by way of the Indian Ocean and the Suez Canal.
After the Barn was a smaller book, a more personal book, the kind of book publishers don't know how to promote even though readers often find them deeply gratifying. I'm one of those readers, and I wrote at length about Pollak's memoir on the Bleader earlier . . . . This post isn't about the book; it's about what happened after he finally finished writing it.
Nobody wanted to publish it.
What about Simon & Schuster? S&S brought out Dr. B and Colombo Bay, and his editor there liked the early pages of After the Barn that Pollak showed her.
Pollak tells me his agent "said it was pointless to send the manuscript to S&S because the market had tanked, especially for memoirs." He changed agents. His new agent said the same thing— Simon & Schuster was too big a house for his memoir. But she was "cautiously optimistic that it would find a home at a smaller house." She sent the book to a dozen editors and Pollak himself approached a half dozen more.
"Most passed without comment," he said in an e-mail. "Others passed, too, but said nice things, e.g., 'I read and was very moved by your memoir. You, of course, write beautifully . . .' (Nan Talese, Doubleday) and 'I have read fifty pages so far of your memoir. What I have read is beautiful and very sad—and I do plan to go on reading. But what I do know is that Nation Books is not the imprint for your book . . . . I write this completely under the spell of your haunting prose' (Carl Bromley, Nation Books)." 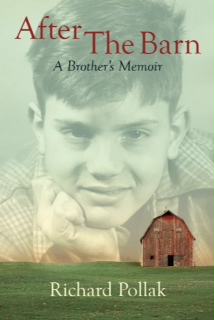 Eventually his agent gave up and Pollak stuffed his manuscript in a bottom drawer—"somewhat grouchily, I confess." But last fall he had a change of heart.
"Stop sulking, said my wife, serialize the book at your blog. After months of dithering, I genuflected to Dickens and did just that, beginning last September. Many readers of the weekly installments also found the book compelling, so I gave the manuscript one last edit and took the e-book route, where you find me now. Book Baby, which converted the manuscript to ePub and zapped it to Kindle, Nook and ten or so other retailers, also supplies printed copies. I ordered 150 [at roughly $10 each] and so far have sold about forty. With luck, paperback and e-book sales eventually will bring in enough to rethatch the roof on this industry's cottage.
"Or, with a great deal more luck," Pollak went on, "the book will go viral [and] Simon & Schuster or one of my other previous publishers will emerge from under their desks and reconsider."
What Pollak called step one, creating the e-book, is "easy and inexpensive." Book Baby charged him $249, though the printed copies were extra. The e-book price of $4.99 was one he set himself. Amazon and the other e-tailers give him a 70 percent cut of that $4.99, passing it along to Book Baby, which deposits it in Pollak's account without keeping any for itself.
"Step two is the hard part: promoting the book," Pollak told me. "You have to do this yourself, which many writers find difficult because (like me) they lack the Barnum gene. But it's a must! (Can this old dog learn new e-tricks on Twitter and Facebook? We shall see.) For what it's worth, my experience with Book Baby was smooth from start to finish."
I like to write about authors who publish their own books because once upon a time writers who turned to vanity presses were generally held—certainly by me—to be charlatans and ninnies, and it is necessary to eradicate that stain. It's necessary because self-publication has become not merely the only option to that bottom drawer but an attractive option. It's quick and inexpensive, and the results can be very handsome. And because shabby commercial compromises don't have to be made, self-publication guarantees that the book that appears is the book the author had in mind in the first place (for better or worse). For those terms, writers are increasingly willing to pay a price: no advance and no promotion you don't drum up on your own.
"Book Baby also keeps tabs of my earnings," Pollak mentioned, "which I can monitor just by logging into my account. Compare all this to the business model of the past, where the publisher gives you 15 percent of hardcover sales and 7 percent of the paperbacks."
Seventy percent of $4.99 is pretty comparable to 15 percent of a hardcover price upwards of $20, except that publishers couldn't imagine a lot of readers paying upwards of $20 for Pollak's unhappy memoir and turned it down, so the comparison's meaningless. Our modern do-it-yourself culture signifies—to me at least—worrisome social atomization; but one thing good about it is that if you have to, you can.
*  *  *

To read the first two chapters of After the Barn, and/or to order the e-book, please click here. To order the paperback, contact Tom Parker at tom@parkerartists.com or at 212-864-7928.
Posted by RICHARD POLLAK at 4:50 PM No comments: